The death of Robin Williams attracted significant attention from the military community, gladly not the usual ignorance, ie. that his passing received more publicity than that of the recently deceased soldier/sailor/airman/marine lost overseas, and said fallen freedom fighter or another was more deserving of the outpouring of condolences and grief than a member of the American bourgeoisie, but rather regarding the controversial and tragic terms of his departure. 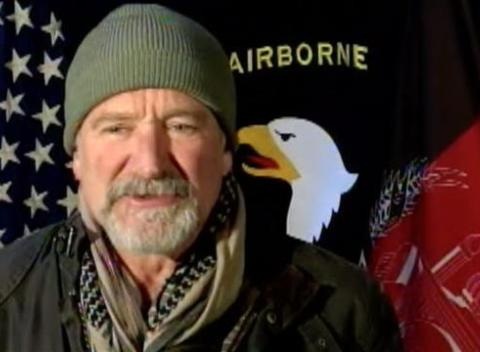 Given the tremendous support Mr. Williams lent our troops throughout the GWOT, and thus the adoration and respect which followed, this was not your garden variety celebrity death in the minds of many military members; most of my friends, and friends of my friends were genuinely grief-stricken at the news of his passing, and yet, much anger and frustration permeated the ensuing discourses that circulated the corners of our various media outlets because it wasn’t an overdose, or a reckless driving accident, but a suicide. “He’s a coward,” they said. “The piece of shit; he quit on his family and friends,” they said.

I don’t think anyone of sound mind will make an argument *for* suicide. The gears of adversity can crush even the most ironclad spirit, but under no circumstances should quitting be considered a viable option. Ever. And if you find yourself at that point, reach out. Ask for help. If you think no one wants or cares to help you, I promise you’re wrong. Depression is a serious issue, and no one is immune to that fatal grip without help.

Now, celebrity suicides aren’t particularly uncommon; they come and go with the usual cadence of fanfare and conjecture. How could so and so do such and such at the height of his yada ya. Goes to show that depression knows no social and economic blah de blah. Survived by wife and child. Etc.

But Robin Williams wasn’t just another celebrity to many of us. He was one of the good guys. Some say he was one of us, at least in an honorary sense. If he wasn’t necessarily one of us, he certainly seemed to understand. And yet, here were other service members slandering his name in spite of all the good things he did, not just with his movies, and stand up, but countless USO shows (he was among the first during the invasions) and charity contributions.

But I’ve seen this vitriol before, spat in the faces of service members who succumbed to the same fate. “What a turd. What a coward. He’s a fucking quitter,” spoken openly and plainly by men I knew to be close friends of one particular fallen service member we all knew who served honorably, ETS’ d, and was tending bar at the local watering hole downtown.

Unbeknownst to us, he had been at war with his demons long after his days of “three months on, six months off” were over, and feeling he had no one to turn to, and much to the shock of his closest friends, took his own life. I have never understood the callous, dismissive nature by which his memory was treated. This, a warrior, a fellow initiate of an elite and dangerous machine, all of the pieces that made this man, reduced in sum to ‘coward’ because he lost his battle, a battle we couldn’t see on the outside, nor possibly begin to understand.

As a member of the armed forces community, I can see how it is easy to view certain frailties as black and white issues, especially in matters of suicide.

For those of you who served, almost all of you have seen or at least heard of the guy in your boot camp or basic training class who was on suicide watch, surrendered boot laces, belts, and neckties, wearing a road guard vest, sleeping on a bare mattress by the fire guard desk, held under constant physical scrutiny.

Was this meant to be a tactic in humiliating the faint of heart from using suicide as a ticket out of the military (not an infrequent occurrence to be sure), or was this the official guidance for dealing with, ie treating, those with severe mental trauma amplified by the austere environment that was initial entry military training? Whichever the case, it was immediately apparent to me that suicide, and by extension, depression, according to the military is simply weakness, and in order to combat suicide, one must simply not be so weak, otherwise your problem detracts from the team and the mission, costs resources, wastes time. Therefore, in the military mind, suicide is selfish. Suicide is weakness. Suicide is quitting. Suicide is cowardice. More could be said on the matter of the military and mental health in general, but that is an entirely separate dialogue.

But to label suicide as cowardice oversimplifies a matter that goes deeper than the act itself. Suicide is the final symptom of a larger issue, not necessarily the illness. We all get it; those left behind are the ones who ultimately suffer, and it is very easy to armchair quarterback someone else’s failed bout with their demons and claim that they should have found the intestinal fortitude necessary to persevere. 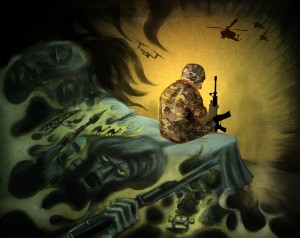 No one disagrees that taking one’s own life punishes the loved ones of those remaining most of all, but to degrade the name of the departed for that one singular final act makes many presumptions about that person, their support system (or lack of one), and the nature of depression itself, and is equally reprehensible. We don’t know all the facts, and we don’t live in a black and white world, especially in matters such as this, where much of the battle is internal. The realm of the mind is a realm not easily dissected, and the factors that contribute to suicide that reside on that internal battlefield deserve more nuance and respect than a simple matter of “manning up” and “driving on.”

Is suicide selfish? Yes, absolutely, but there are many actions we commit to on a daily basis that can be categorized as selfish, and while an act of cowardice is inherently selfish, a selfish act is not in its nature a cowardly one. This isn’t a matter of mere semantics; it’s matter of respect, both for the departed and for the illness that took them.

Suicide is a symptom of depression, and depression is complicated. If depression was simple, we would have one solution instead of a panorama of therapies, ranging from electroshock (yes; electroshock therapy is a practice in use today) to hypnotism, to a whole catalog of drugs, and everything in between.

So if we can all agree that depression is complicated, and therefore the solution for depression is similarly complicated, it stands to reason that people who fail their battle with depression didn’t do so because they lacked courage. Depression isn’t like the flu, where it goes away after a regimen of pills, hydration and rest. It’s a cancer; it may enter remission, but it forever becomes a part of who you are, a part of your cross check, something you will continually monitor and battle for the rest of your life.

Like cancer, some people contract more lethal forms of depression than others, and not everyone possesses the wherewithal to defeat it. Does that make it okay if people take their lives because they were depressed? Absolutely not. I say keep supporting your buddies. Keep fighting and keep them in the fight. But let’s not reduce those who succumb to their disease to simple terms of degradation, when their ailment is anything but simple.