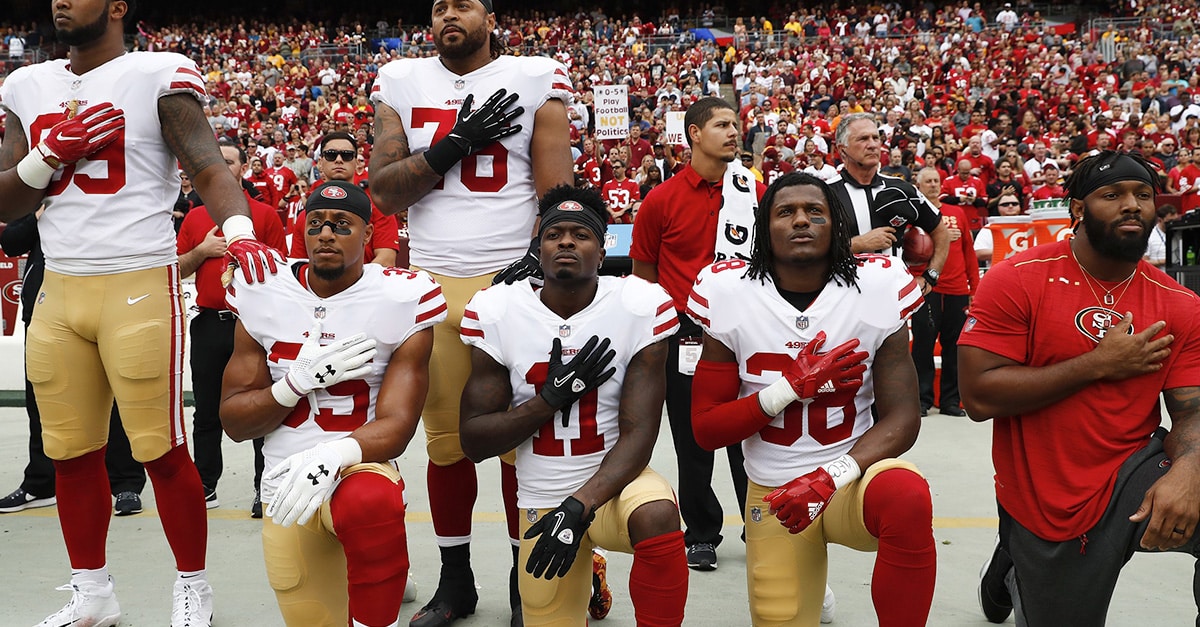 This first appeared in The Havok Journal September 18, 2018.

Here we are, two weeks into the football season, and already the divisive rhetoric has reached a fevered pitch, despite the fact that only a handful of players are still kneeling (only two on one team by one count).  What makes this upsetting – the fact that the conversation isn’t about racial inequality, or even 1st Amendment rights – the discussion revolves around whether kneeling during the National Anthem is disrespectful, or if it disrespects veterans, or fallen service members, or if it is actually patriotic – and you know what?  We are all missing the point!  We have made a mistake, that I warn leaders about regularly.  This mistake prevents us from finding meaningful and thoughtful solutions that make our organizations better, and instead has us focused on the pedantic minutia that binds us up and makes it an ad hominem issue that we can attribute to a particular person, or group of people and blame them.  The mistake?

We make the interesting important.

While we are mired in debate about a purely symbolic gesture, we don’t begin to work toward solutions on what it symbolizes.  More importantly, our preoccupation with the argument has us distracted from other issues that desperately need solutions.  We are passionate about an emblematic issue and ignore real issues that affect our entire population – across every race, creed, religion, age, gender, sexual orientation and socioeconomic position. For some perspective, here are just a few problems in this country that effect huge amounts of people:

Over 7,000 veterans will commit suicide this year alone

There will be over 10,000 victims of DUIs this year

14.5% of Americans live below the poverty line

Over 65,000 Americans will die of a drug overdose this year

There are just a few issues – some that affect more than others. Some that may be more important to us because it has touched our lives directly. However, notice that these statistics don’t say “1 in 3 ‘white’ girls” or “10,000 homosexual victims of DUI”.  They are numbers of Americans.  Americans that need help.

My point with all these random statistics- we have enough issues in this country to worry about and solve than what we get caught up with in our daily lives. Look at your social media feed and tell me what has dominated the last few days – is it any of the above. I doubt it because these issues aren’t as salacious as others – maybe they don’t sell news. Or maybe they just can’t be argued about, so we don’t talk about them. What we have done is make something that is interesting important – and it may be important- but should it dominate what we focus on with all these other issues?

As Americans, we need to prioritize what is important and stop making the interesting the important. We may need to put our own issues aside temporarily for the good of our Nation. It’s how we are supposed to behave. It’s not easy – it’s not supposed to be – that’s what has made our Nation great – the sacrifice of few for the good of the many. We can accomplish it all together – but separated we will accomplish nothing.

Finally, stop talking about the NFL beyond who wins and losses – let’s focus on football for what it is – a game.

J.C. served in the U.S. Army as an infantry officer for 20 years, primarily in special operations and special missions units with more than 11 combat tours. Since retiring from the military, J.C. has brought his innovative and unconventional thoughts on education, leadership and resiliency into the private sector, consulting with Fortune 500 companies, the NFL, NBA, NCAA and professional sports teams including the Denver Broncos, Carolina Panthers and the Charlotte Hornets.

He is considered a thought leader in adaptive and proactive programs of instruction centered on the development of leadership behaviors and values suited to dynamic environments and situations of ambiguity and adversity. J.C. recently developed the “Prodromos Developmental Model”, a capacity-building system designed to develop people and leaders for the future, which is outlined in his book. His methods have been featured in Forbes Magazine and the Huffington Post and his work has been referenced  in Forbes, Inc. and Entrepreneur.