HomeCulture“Operation Inherent Resolve:” Why Are People So Upset About The Army’s Newest Combat Patch? 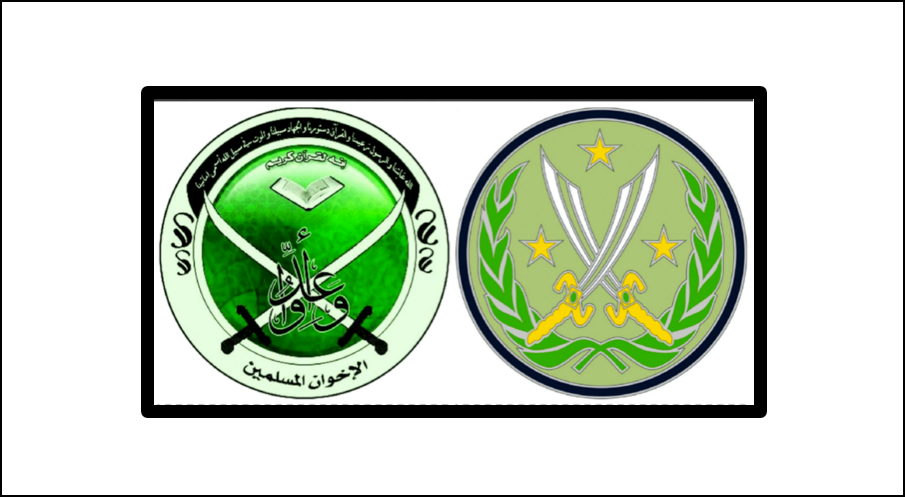 Recently, via the Army’s Facebook page, a post discussing the Army’s new combat patch was posted and it has generated lots of intense criticism from many active duty personnel and veterans.  Many people are blaming Obama for “making the Army patch look too similar to an ISIS patch.”  Let’s examine the situation and lay out some facts.

First, this patch is not that new.  The patch was approved by the US Army Secretary John McHugh on March 23, 2015, and soldiers who have been fighting ISIS in the region began sewing (or ironing/attaching) it on their uniforms in April of this year.  Much of the controversy is due to the imagery used on the patch.  The patch depicts two crossed scimitars, a wreath, and three gold stars.  ISIS units have also been seen with patches and flags depicting two crossed scimitars.  The image below has been a popular one that people have used to compare the Army OIR patch (on the right) to an ISIS patch (on the left).  I personally do not see much in common with the two patches, other than the crossed scimitars. 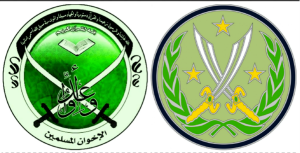 The Army states that the crossed scimitars represent “the twin goals of the U.S. led coalition: to defeat the Islamic State and to restore stability in the region”.  The palm wreath is a symbol of honor.  Many people have complained that the Army is aligning itself too close with Islam, stating that the green color of the patch, which is also the primary color of Islam, is “despicable” and that we are “capitulating” to the enemy.  There’s just one problem… the picture above looks nothing like the actual patch the Army has approved for OIR.    This is what the actual Army patch looks like: 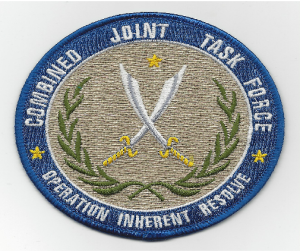 As you can see, the patch is not green at all.  The buff and blue colors of the patch, along with the three gold stars, represent the three star command of the land, air, and sea forces involved in the fight.  Moreover, some veterans returning from OIR are telling us that no one is wearing them on their uniform at all, and that it’s used more for decoration than an actual piece of uniform apparel.

The only Islamic connection one can make with the patch is the image of the scimitars.  The scimitar is a weapon used by many Islamic countries.  The English term scimitar, dates back to the mid-16th century from the Middle French word cimeterre (15th century) or from the Italian, scimitarra.  The ultimate source of these words is unknown.

The practical use of the scimitar came about as an ideal weapon to use while riding a horse.  Because of its curved blade, it allowed the rider to slash an opponent and continue riding without getting stuck like stabbing with straight swords on horseback would do.  The earliest known use of scimitars is the 9th century Turkic and Tungusic soldiers in Central Asia.  The scimitar has also been widely used in the Middle East as a beheading tool.

So, the scimitar is a weapon widely used by Asian, North African, and Middle Eastern countries for many centuries.  However, apparently the same type of weapon was used in France and Italy, and possibly other places, as well.  It is however, widely recognized as a Middle Eastern weapon and symbol.  I feel that this image represents the territory that Operation Inherent Resolve is taking place in very well.  Furthermore, I do not think that President Obama finds the time in his day to create Army patches for campaigns.  I’m pretty sure that job falls to someone other than the POTUS.

This is just another case of biased media, trying to prove a point and position, by altering an image in this case, to create an emotional response from a certain section of the population.  Knowing full well, that the majority of people will not take the time to research the image and find out that the patch actually looks nothing like the image they are using in their story.  They are seeking to push the “Obama is a Muslim” story and create fear that the Army is going to cater to Islam and we will wear patches to show our association and alignment with them.

I encourage everyone to read and react to everything they come across with a certain amount of skepticism, (unless you’re reading the Havok Journal).  Put in the time to research things and find out if they are actually true before you respond.  Especially if the story is something fantastic or hard to believe.  If it’s hard to believe something is true, then it may very well turn out to not be true most of the time.

At the end of the day it’s just another innocuous patch for a joint operation, issued by the Army for the participants of Operation Inherent Resolve.  There’s no grand conspiracy, no Islamification of our troops, and we are not capitulating to ISIS.  Apparently it seems that Russia is going to be taking care of the ISIS problem, so there won’t be too many people wearing this patch anyway…and I’m perfectly fine with that.  But that, is another article for another day.