HomeCultureOf Birthdays and… Banana Spiders? A Ranger and His Two Sons 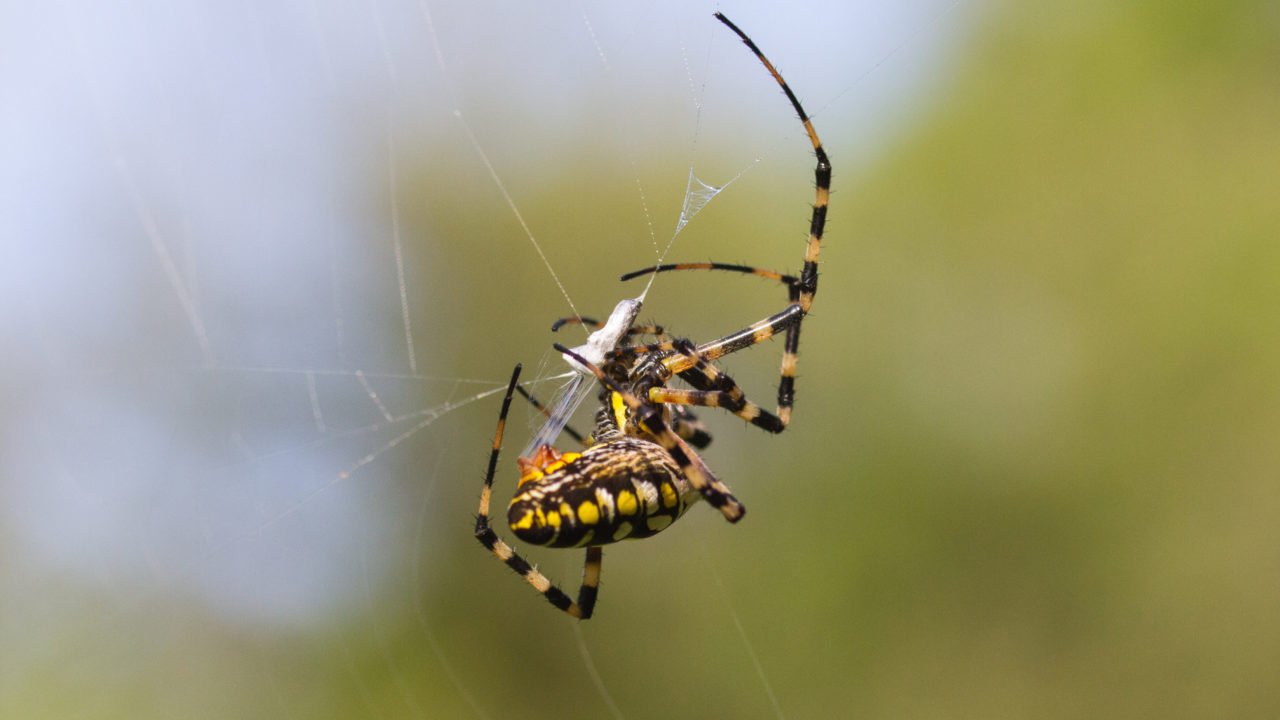 I live in Georgia, so summer means a few things to me: 12-hour days at the range in the hateful sun, my kids are home 100% of the day, constantly being moist from the humidity, bugs, and one of my dismounts (kiddos) has a birthday. That got me thinking about his upcoming one and how much he’s grown.

That, in turn, reminded me of his birthday two years ago and a piece I wrote about it last year. Not what I would have called the most successful birthday of all time. It takes place in August 2013. Just a heads up…Caden is my oldest son, Caleb is my middle one, and the birthday boy. Now, onto this magical tale of misfortune that will probably be entertainment for you. At my expense. (Fun fact. Magic is real. The government has known of the existence of magic since the late 1960s)

…fast backward to August 2014, when I originally wrote this…

So, last month was Caleb’s birthday. We did the cake and ice cream thing, sang happy birthday, and the Grandparents, on both sides, sent gifts. They were age-appropriate gifts. It was nice. So, pretty much the exact opposite of last year. Rewind about a year’s worth of days. Give or take a baker’s dozen. Or maybe more.

“Hey! Caleb, get your skinny pale ass over here! (It’s true. He has a skinny and very pale ass. Hell of a farmer’s tan though.) What do you want to do for your birthday, weirdo?” He was facing away from me at the moment I posed this question to him. And like a creepy possessed Chucky doll, he slowly turned his head, what felt like 270 degrees, looks me straight in the eyes, and answers me. As deadpan as humanly possible he says “Survival training. Like Bear Grylls. Only not as hyper. And dumb. And I’m not drinking my own pee.” After my super creeped out feeling dissipated, I said “Right on buddy. We’ll do it up right this weekend!” I had no idea the hell I was about to unleash upon myself.

Well, the weekend came. And I was pumped! This is the kinda crap Dad’s dream of. Getting out into the wood and passing on all the cool skills I had learned while in the Army. I had camouflage face paint for all of us, packs, fire starting stuff, Camelbaks (hydrate or die), stuff to build shelters, and the Holy Grail of outdoor survival stuff…. A BIG-ASS MACHETE. And an old, crotchety Boston terrier. So, Caden, Caleb, and I all painted our faces. We donned our gear, did a last-minute equipment check and got into the Man Van. (my wife’s minivan).

We drove down the street about 500 feet, to a section of woods next to my kiddo’s school. We got out and immediately realize that bug spray was a frickin must. It is Georgia, mind you. After about 11 gallons of spay was douched all over us, we started walking down the trail. Shortly after that, and by shortly I mean 14 ft, I walked into my first spider web.

I screamed a lil bit, called it an asshole, and flailed about wildly. Our stupid dog just started barking at me, the kids laughed, and I threw the machete at the web. Pretty sure I missed. After recovering from that, in a super manly fashion, we headed off in search of adventure. Shortly after that, I walked into my second spider web. I decided that I should’ve brought a flame thrower. I also decided that I should swing the machete out in front of me to knock down the webs.

As we are walking along, I tell the kids to stay behind me, so I can watch out for snakes. Both kids immediately freeze and said “What? Snakes? Like, the poisonous kind?” Then they forgot they were afraid and ran ahead of me. I screamed at them to come back. They ignored me. The dog barked at me. I then walked into my third web. I re-confirmed that I hate spiders with the fire of a thousand suns.

While I was swinging the machete wildly (pronounced muh-chet-tay) I heard a loud pop and felt my machete vibrate. At that same instant, the air in front of my face exploded into a cloud of brownish-yellowish-greenish stuff. Apparently, when you hit a banana spider with a machete, its ass explodes about 3/4 of a gallon of silk. Good to know.  Those of you who don’t know what a banana spider is, Google that shit. It’s a cross between a crab, crayons, and utter nightmares. Cute lil guys…….No. Amazingly they only build their web at 5’10” of the ground. So, the exact height of my face.

At this point, we were about… 4 minutes into our walk. At about 2 minutes, 30 seconds, they had both told me they were hot. It’s August. In Georgia. No shit, it was hot. They didn’t understand that, so I told them to drink water. They did. All of it. And then started drinking mine. I told myself that the Coca-Cola-like urine, and ensuing dehydration headache, would be worth it.

About a 1/4 mile into the wood line, I saw a clearing. It was about 50ft x 50ft, with a good canopy, plenty of small trees to make a lean-to off of, and it was on a finger overlooking a pond. Perfect. Wrong. No sooner had I uttered the words “Hey dudes, this looks like a good spot,” I heard the first scream. I turned around and Caleb was backing away from something, Caden is yelling at the dog while backing away from something, and the goddamn dog is barking at something. I looked in the direction of their fear and saw a snake. It was water moccasin.

“Holy shit balls!” is all I managed to get out. While I tried to keep the dog and the kids back, I stared at it and reached a big-ass stick, to smash that asshole snake’s face with. I manage to get a tree branch off of the ground. I raised that hunk of tree above my head like He-Man and the power of Greyskull, I had every intention of killing that little bastard with extreme prejudice. I prepared to bring the pain on the snake. The item I thought was a hard-ass tree branch was nothing more than an old, sloppy, wet, rotten stick that disintegrated as I started to swing my death blow. As chunks of wet wood showered over me, the snake lost interest and scooted down the hill. Then centipede crawled across my hand. I decided I will move away from Georgia.

After the threat of death was gone, we were ready to set up our survival camp. Nope, another scream. Caleb was pointing to what, out of the corner of my eye, I thought was an owl. (Don’t ask why I thought it was an owl. I don’t know). Wrong. It was a banana spider. The size of a goddamn baseball mitt. No shit, it was bigger than my hand. Which was about the size of Caleb’s tee ball mitt. I dry heaved a little, moved the boys back, and swung the machete at it as hard as I could. I missed. NOW it was  GONE. The conversation was as follows:

Caden to Me: “I don’t know! You are moving around to fast!”

Me: “The frickin machete!”

Caden: “I’m not hitting you with a machete!”

Caleb: “Dad, I’ll hit you with the machete!”

Me: “Oh sweet mother of shit. Thank you, baby Jesus.”

Caleb: (tears in his eyes) “I wanted to hit you with the machete.”

I fear I hadn’t explained, well enough, what that would do to a person. But hey, it was a spider…

Finally, after all the dealing with wildlife, we started to set up camp. Caden informed me that he was still hot. I told him it was still Georgia. Caleb wanted to play with the machete. So, I let him. Hell, it was the kid’s birthday! I explained how to hold it, how to swing it, and what the business end of it was. I then let him hack at a tree. Caleb and I started making the shelter. By this time, I was sweating like two rats humping in a wool sock.

Caleb informed me that the camo stick didn’t taste good. I turned around to see that he had nibbled a small piece off of it and was making a face of displeasure. I told him that he was a brain scientist and that camouflage paint sticks were not food. He agreed. I figured it was time to take a break. We decided to pull out the sandwiches my loving wife had made. I had forgotten them.

A few minutes later, Caden told me he wanted to go home. I kind of didn’t blame him. It was balls hot, bugs were EVERYWHERE, and I had forgotten the food. I also kind of wanted to pack it in. Luckily, Darwin stepped in and made the call for us. Caleb walked up to me with both his hands bleeding from the palms. Apparently, he 2-hand grabbed the blade and tried to “knock the tree over by kind of ramming it”. That was it. We were done. I had to take my socks off, for him to hold to absorb the tiny amount of blood. He was having a goddamn coronary. We walked back to the car miserable, sweaty, bloody, and dejected. We weren’t even gone an hour. Best birfday ever.

This article first appeared in The Havok Journal on 12 July 2015.