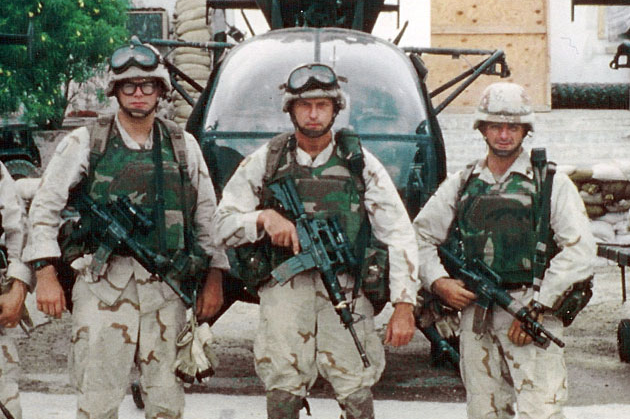 I arrived as a fresh-faced, cherry private to Bravo Company, 3rd Battalion, 75th Ranger Regiment in the summer of 2002, as a consequence of both virtue and downright luck.

I say virtue because when our class graduated RIP, we all lined up for the battalions we wanted, and then based on the needs of the Regiment; the lines got shuffled around until all the numbers matched up. Everyone basically wanted 1st and 2nd Battalion simply to get the hell out of Ft. Benning and all but a handful of guys rushed for those lines.

I naturally wanted to be on the West Coast and had luckily positioned myself in line for 2nd Battalion with plenty of guys between me and the cutoff man. We waited as the shuffle took place, which mostly consisted of the guys past the cut-off man for the lines in 1st and 2nd Batt being moved over to the disproportionately short line for 3rd Batt. I remember actually thinking of how lucky I was to be going to 2nd Battalion and already trying to imagine what the coast of Washington would be like, a place I’d never been.

As the shuffle ended, another graduate that I didn’t particularly get along with approached one of the cadres, and based on his body language was pleading his case as to why he didn’t want to go to 3rd Batt. Obviously, he had said something that provoked a rare sense of compassion from the cadre, as the cadre walked the graduate to the front of the lines and announced that he needed a volunteer to switch out of 2nd Batt’s line and go to 3rd Batt. As it turned out, the other graduate was from WA and had a grandmother who was dying and he wanted to be closer to his family in her final months.

As I mentioned, I didn’t particularly get along with this guy and when I say that, I mean, he was one of the guys from the beginning that I wouldn’t have minded washing out. Not saying that I wanted him to wash out, but he wasn’t someone I would have lost any sleep over. But in the brief moments that followed the announcement for a volunteer, I thought about it under the following rationale: 1. 3rd Batt was deployed to Afghanistan and that meant instant gratification on the desire to go to combat. 2. Rumor already had it that 3rd Batt had the best barracks, the equivalent of an apartment unit with your own bedroom. 3. It had been Bravo Company, 3rd Battalion that had fought the battle on Oct 3rd 1993 in Somalia which had been immortalized in the book and subsequent film, Black Hawk Down, both of which I had read and seen multiple times by this point.

The Somalia Generation of Rangers were my heroes and even though I had no idea whether or not I’d actually get assigned to B. Co., the possibility of serving under that great lineage was worth staying in what my Drill Sergeant had always referred to as, “The Arm Pit of America”.

So I switched with the kid from Washington and joined the line in 3rd Batt, which had my RIP buddies Jared Guff and Jason Hoffsker (aliases) in it. Long story short, by chance I was assigned to Bravo Company, but our class of RIPies was never sent to join the rest of 3rd Batt, which was already deployed to Afghanistan. In all fairness, we were all pretty cherry and even though we had all the motivation in the world, we were better suited to get smoked all day while doing “area beautification” around the compound, conducting tape drills, cramming into our memory every single nomenclature Regiment had to offer and learning the history of 3rd Ranger Bn from the French and Indian War to present than we were for combat.  I’d always been a big fan of history and one of the first things I noticed about the history of 3rd Ranger Battalion was the significance of the date October 3rd. 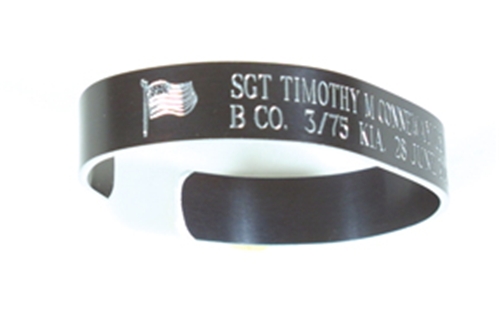 As a brand-new private, one of the first things I did when we got released the first day was go to Ranger Joe’s on Victory Drive and buy a Ranger KIA bracelet and Ranger coin.

A KIA bracelet is a black aluminum bracelet with the name, rank, unit, date, and theater of a Ranger who died in combat. The modern-day Regiment in 2002 had a total of ten Rangers killed in action and bracelets were available for Roy Brown and Larry Barnard who died in Panama, Lorenzo Ruiz, James Cavaco, Jamie Smith, Dominick Pilla, Richard Kowalewski, and James Casey Joyce who died in Somalia, as well as Kristoffer Stonesifer and John Edmunds who died in Afghanistan.

Because I had read the book Black Hawk Down and seen the film several times, I felt a certain bond with Rangers who had fallen in Somalia as I knew the story of their sacrifices so intimately and standing there at Ranger Joe’s, I picked a Ranger’s KIA bracelet from Somalia, SGT James Casey Joyce. I knew specifically who he was from the book and wanted to honor his sacrifice by wearing his bracelet, and by doing so, forging an even closer personal connection to the date, October 3rd.

As I grew up in Battalion, the third day in October came and went and as it did, my black KIA bracelet bearing the name of SGT Joyce, became more and more faded from wearing it daily through training cycle after training cycle, deployment after deployment, and of course the extended phase of Ranger School. But each year, if we were in garrison, Battalion would have a formation commemorating the date both as the date of activation, or birthday of the modern 3rd Ranger Battalion and also for the sacrifices made by Bravo Company and the six fallen Rangers of the Battle of Mogadishu.

However in October of 2005, 3rd Battalion was deployed and I found myself attached to Alpha Company in Mosul Iraq, as part of the contingent sent to plus up Alpha Company’s numbers as the main effort in Iraq. With the operation tempo and sleep cycle the Task Force was in, days and dates blurred and if you’d have asked me what month it was, I would have had to look at my watch to tell you.

One morning, the platoon I was attached to was spun up for a daylight hit that involved details that I will leave out for brevity, but the potted version of the outcome of our first attempt at the mission was that an insurgent who found himself at the right place at the right time and was able to throw a hand grenade from a bridge into the Stryker vehicle that the squad I was assigned to was riding in.

Needless to say, what followed afterward was one of the most intense moments of my life, but luckily everyone ended up surviving the morning (albeit earning Purple Hearts in the process). After the attack and quick stabilization of the worst of the casualties, the Task Force returned to base in order to take our wounded to the hospital, as well as change out the vehicle we were in with another that was undamaged as our Stryker had severed hydraulic lines and electronics that had been damaged by shrapnel. 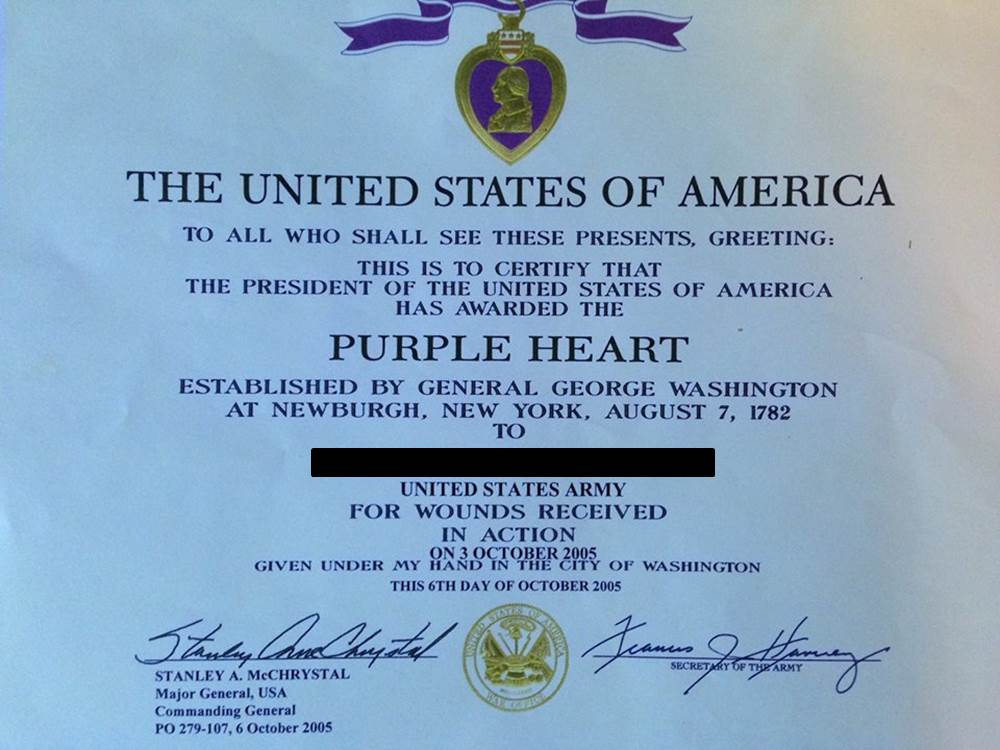 After we got accountability and refitted our vehicle, we ate lunch, and those of us that only had blown ears and minor TBI headed back out with the platoon in order to complete the original mission. As we sat at a mission staging site away from our FOB waiting for the green light, our Platoon Sergeant, SFC Jared Van Aalst asked the platoon if anyone knew what day it was. I had worked with SFC Van Aalst during my brief gig with sniper section and could tell by the tone of his voice that he already knew what day it was and looked at my watch.

I immediately looked at the bracelet on my other wrist, by this point, no longer black but silver with the inscription of SGT Joyce’s name and the date that he died, faded and barely legible. In an instant, the gravity of the moment and the day’s events hit me like a ton of bricks. I had been in a bit of haze from the time we got hit up until now, almost on autopilot from the moment we got back into the wire after the first time out. My boots and kit were still fresh with the dried blood of my Ranger buddies who had eaten most of the shrapnel, shrapnel that I would have eaten, had their bodies not been in the way, had their flesh not eaten it for me.

I wondered if this is how the Rangers in Somalia felt on the morning of Oct 4th, 1993 when they finally arrived at the safety of the stadium under U.N control. Did they look at the blood of their comrades, remembering the ghastly sight of their wounds, the expressions of pain, and feel a sense of gratitude that it wasn’t their blood? Did they feel, as I did, a deep sense of guilt that it was their buddy who ate the shrapnel and not them?

One of the privates in the platoon that I didn’t know answered up that it was the anniversary of Mogadishu and the birthday of 3rd Battalion, and a discussion of silent reflection amongst the platoon followed until the call came that we had been stood down. Had it not been for SFC Van Aalst reminding the platoon what day it was, I wonder whether or not any of us would have remembered on our own. After he reminded us, I couldn’t think of anything else, but until he did, what the day was had to have been the furthest thing from my mind.

I ended up getting out of the Army about 18 months later in January of 2007, but the date of October 3rd has remained more significant to me than any other day throughout the year. It’s more significant than my birthday or any other holiday, minus maybe Independence or Memorial Day. Throughout the years, I’ve lost a significant number of Ranger buddies, including MSG Jared Van Aalst, who was killed nearly five years later in Afghanistan on what would end up being my mother’s birthday. 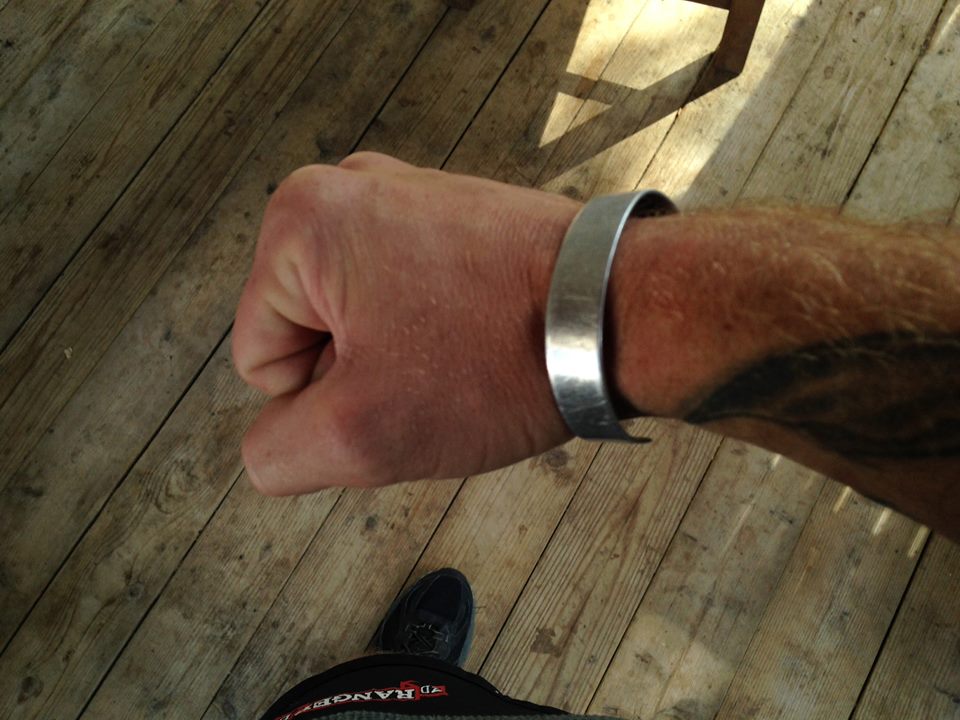 Several of my buddies have KIA bracelets now in their honor, yet I continue to still wear the bracelet of a Ranger from a generation I never knew, a conflict I never fought in. I’ve sometimes wondered if I should buy a new bracelet, wondering how I could possibly be honoring my brothers if I don’t.

My Ranger buddies made the sacrifice so that I wouldn’t have to. Rangers in Somalia made the same for their Ranger buddies. Greater love hath no man than this, that a man lay down his life for his friends (John 15:13-17).

I love you, guys. Thank you for your service and sacrifice so that Americans may sleep peaceably in their beds at night.

This was originally published on October 3, 2014.