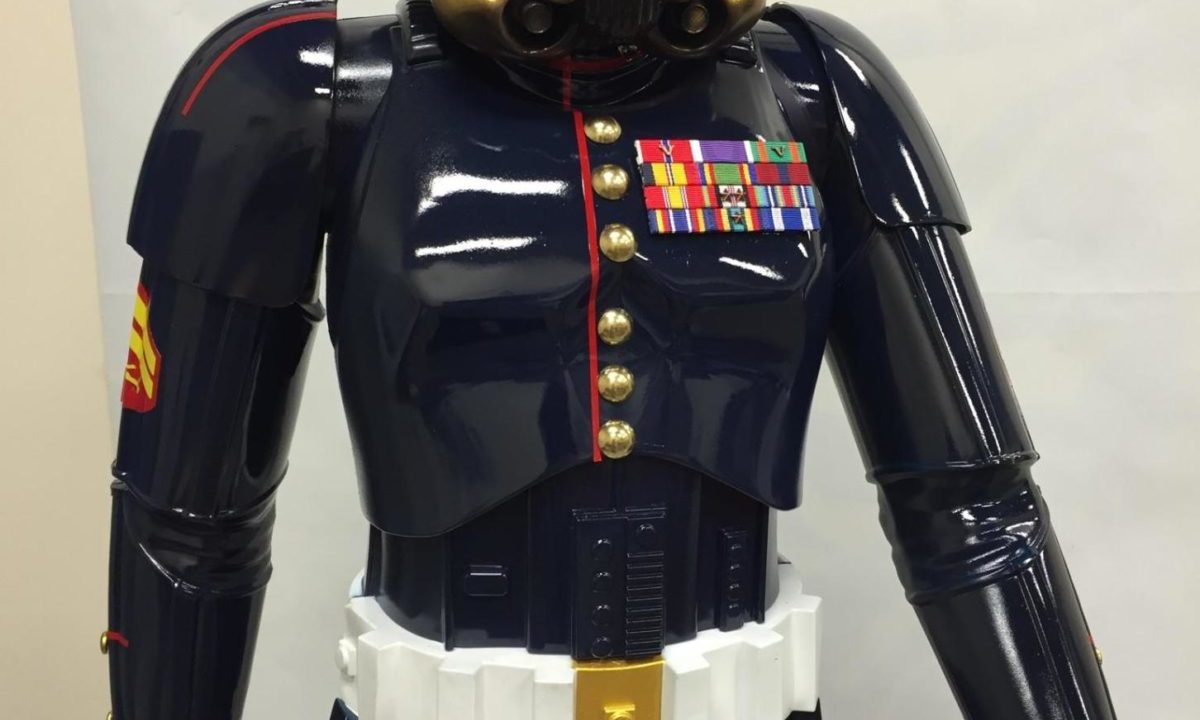 When a US serviceman dies in combat, there are a variety of reactions by the families.

Some families become angry and embittered.

Some families mourn, adjust, and move on with life.

Some families simply never move on.

Some families turn loss into a way to give back to their communities and other Gold Star families.

The Patino family is one family in the last category. After losing their son and brother, Marine Scout Sniper Cpl. Claudio Patino IV in June of 2010, the Patinos quickly turned their grief around and decided that the best way to honor their warrior was to turn his name into a symbol of hope and giving.

They did it in the most epic way I’ve ever seen; A golf tournament.

Hey there, author, did you say a golf tournament?

Yes, you read that right.

What does a golf tournament have to do with remembering a great Marine and family member?

As your reporter in the field, I decided to take a firsthand look into the inner workings of a grass-roots charity event. Just call me Brian Fantana.

Much of the organization and coordination of the event was undertaken by Claudio Patino’s brother, Alex. This man and his wife Ashlie have shown a true talent and passion for immortalizing his brother in awesomeness. If you ever want to meet a cool family, the Patinos are it. All the men are the nicest guys you could ever meet, despite looking like they should all be mob enforcers (their sleeve tattoos weigh more than I do), and all the women look like various versions of Sophia Vergara, but without the weird voice.

What does that have to do with anything?

Anyway, he started a foundation called Nux4Life. The name comes from a brass knuckles tattoo worn by Claudio, which became the unofficial symbol of the 3rd Battalion 7th Marines Scout Sniper Platoon after his death. If you ever see a guy with a brass knuckles/Scout Sniper symbol tattoo, he’s probably a 3/7 sniper. 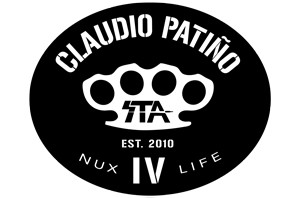 The foundation began having the golf tournament in the Patinos’ home town of Yorba Linda, California two years ago. It has thus far been an annual event every 21st of September.

The day begins early. At 0530, the Patinos have already been up and moving, scurrying to load boxes, tables and chairs into various trucks. The setup at the golf club is extensive, but rapid under so many working hands. A 70 degree sunny morning with a light dry breeze (NW 4-8 mph) turns the work into a care-free social event.

I’m not sure what I was expecting when I flew down from Indiana, but it wasn’t this. When I first heard of the golf-tournament/fundraiser, I think I saw a small community center with white vinyl walls, some balloons, a couple of guys flipping burgers on a grill, and twenty to forty locals drinking Bud Light while sitting in plastic chairs.

I sorely underestimated the organizational abilities of Alex.

There were over 150 golfers that day. There were corporate sponsors ranging from a tactical gear company to a large construction firm. A catering company set up by the entrance, offering the awesomeness of breakfast burritos, as well as surprisingly good coffee.

And then there were the prizes. 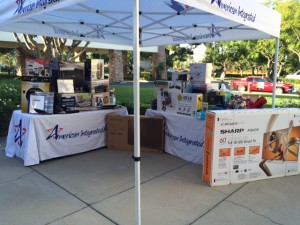 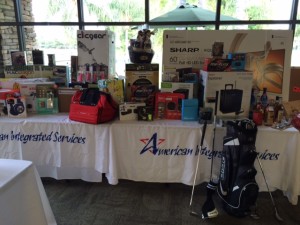 The fundraising events I’ve attended in the past usually raffle off a couple of nature-themed paintings, some gift cards, and maybe a hunting rifle if you’re lucky. This event started by throwing goodie bags, nice polo shirts, and baseball caps at the golfers, all with the Nux4Life logo on them. The goodie bags had personalized golf balls, poker chips, golf towels, and a bunch of other cool crap with the Nux4Life logo. Prizes also included a bunch of stuff with Scout Sniper symbols engraved by either a former-sniper-turned-artist, or sharks with freaking laser beams on their heads. Maybe both.

That’s a huge step up from beer cozies and key chains. 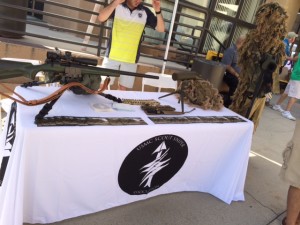 Standing by the entrance was GySgt. Shawn Hughes, the former Vice President of the USMC Scout Sniper Association. The static display had a ghillie suit, some customized Stryder knives, an M49 Spotting Scope (the bane of my existence), and an authentic M40A1 sniper rifle.

Even though the rifle will be raffled off at a later date, it was still the coolest item there. If you don’t know what that means, it is a piece of coveted history to a Marine Corps Scout Sniper. It would be like raffling off a set of Arnold Palmer’s clubs to a golf fanatic, or a pair of Bernie Sanders’ tighty whiteys to a Democrat. 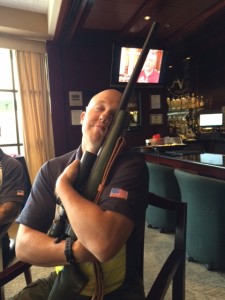 Now I know what you’re thinking, because we’ve all asked the same question; Did they have any prizes for Star Wars fans who also love military-themed stuff?

You bet your sweet bippy, they did. Feast your eyes on THIS! 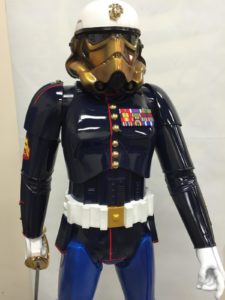 Dinner itself was an event, as a helicopter flew over the golf course to drop a bucket worth of numbered golf balls. Whichever player had the number of the ball that went into the hole won a prize. That’s cool, you know…if you’re into bizarre and awesome ways to give away prizes.

I’m totally into that!

That’s good, reader. Now shut up. The auction itself was done by Dan and Laura Dotson from the A&E show “Storage Wars.” Being a HUGE fan of never watching TV, I naturally had no idea who this guy was. Judging from the reaction of the fans who were present, I was completely in the wrong. The crew from the show scurried around as they taped the entire event, analyzing light levels and getting sound checks. Watching two professional auction…talkers (I have no idea what to call them) was a treat in and of itself. Don spoke so fast that it was like listening to rap, but with a white guy. And less bling. 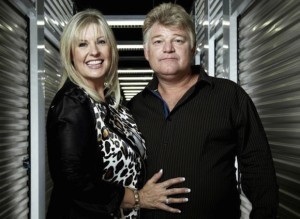 Amongst the crowd were a few of Claudio Patino’s Scout Sniper teammates from 3/7 and 1/5, as well as other Marines. Getting to hang out with that crowd was just as cool as having celebrities show up, and the Blue Label was passed around, along with stories of Claudio and other fallen brothers. Some of the Marines had the opportunity to stand up in front of the crowd and family to describe their brother and the respect they had for him.  Claudio’s parents, Claudio III and Evelyn Patino, rightfully shared the center stage the entire time as they experienced how much the crowd loved their son.

Toward the end of the evening, the wife and children of fallen Marine Scout Sniper Sgt. Joshua Robinson were presented with a $5,000 scholarship and a standing ovation. Including that amount, the event raised a grand total of about $30,000 in charity for veterans and active servicemembers. In the vernacular, those kind of results can be referred to as “Big Pimpin.”

All in all, the event was well-planned and coordinated, and was a blast the entire time. Even if you don’t play golf, it was well worth it just to attend. Many of the readers are probably enthusiastic about giving to charities benefitting veterans and their families, and I could personally not think of a better one to give to. The event is annual, and anyone interested can check it out here.

As far as when the “Storage Wars” episode will air, that has not been determined as of yet. However, it would do my little olive-drab soul a world of good to see it on November 10th. Why? Because…of reasons. DO YA HEAR ME, A&E? NOVEMBER 10TH!!!