HomeCultureMilitary“You Are Not a Mother, You Are a Soldier” 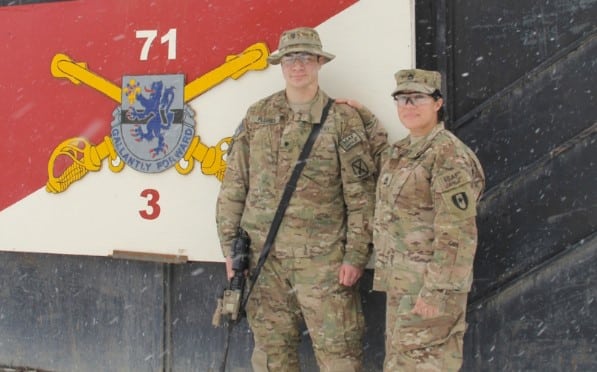 by Mirna I. Velez De Mansilla

“You are not a mother, you are a Soldier!” I will never forget those words. That was in 2007, Mosul Iraq,  my first of many deployments. I was a newly pinned SSG and for the first time in my adult life was in a  place without my family for a very long time. I was a mother of four children, ranging from ages 3 to 17. I was in charge of the OR section of my Forward Surgical Team. We had been in Iraq for only two months when our Detachment Sergeant was sent to another location and in his place, we got a SFC from another unit who from the get-go seemed to have an issue with me. Those were his first words to me, standing in formation while introducing himself to the enlisted members of the team.

I didn’t understand where those words came from. They were like a stab to my heart. Who the hell was this guy to tell me I was not a mother? He didn’t know anything about me and as time passed, I realized he couldn’t have cared less.

Everyone on my team knew I was a mother and a dedicated surgical team leader to my Soldiers. I  promised myself that the Soldiers under my care would come home safe to their families. It is what I  would have wanted if anyone of my children were deployed.

I was an older NCO, I joined the Army at age 30, and believe me, basic was not a cakewalk back in ‘99. Drill SGTs were not what they are today. Why did I join? Was it patriotism, a need to excel in something most women feared, or excitement? No, no, and no! I joined out of pure necessity. I was a single mother of three children at the time. I had done everything I could to take care of my children and not live off government assistance. I knew I could do it… until I couldn’t.

Prior to joining the Army, I worked as a police and fire dispatcher, working the night shift and donating plasma twice a week to be able to buy milk and cereal for my kids. The day I realized I wasn’t going to make it was the day I had just gotten off work and was standing in line ready to pay and felt like everything was spinning. The cashier was talking and I couldn’t hear her, my ears were ringing so loudly, she grabbed my hand from the cart I was holding with a death grip as my youngest child sat in the cart crying. The cashier walked me to a bench and asked me if I was ok. “I thought you were going to pass out at the register, you turned white as a ghost” She looked at my arm, I still had the Coban wrap from when I had donated plasma less than an hour before. She said: “You should eat something before you get up” I grabbed a banana from one of the bags and started eating it. Looking at Mikey my baby, started to cry.

I knew I was not going to be able to do this much longer. That was when I decided I had to do better for my children. They deserved a mother who was physically able to take care of them, to provide them with basic needs, something I was struggling to do.

I grew up in the military. My father was, and always will be, my hero. He was a U.S. Army combat engineer who always seemed to be in the field training but somehow also always managed to be present. That was something that at that moment in my life, I was not.

I made it home and after making my list of pros and cons decided that joining the Army was the best thing for my children and me. I knew what I needed to do to prepare my body physically and mentally. I  kept that decision to myself until I was ready to leave. I would have done anything and everything for my children and joining the Army was the best decision I could make. I knew what a great NCO looked like and acted like. I had the best example there was, my father. It meant I would have to leave my children while attending basic training and AIT but in the end, we would have a better life and be together again. The sacrifice was worth the wait.

Basic was hell, no lie! I thought I had been loaded up in a cattle truck and shipped off to a prison camp. What the hell had I gotten myself into? But I knew it was all just a mind game to get us all thinking the same. Just keep my mouth shut. Do as I was told. It would be over in a few months.

I fell off one of the wooden bars on an obstacle course during the 3rd week or so. It hurt like hell for the entire time I was in basic. The day we came back from the FTX (3 or 4 long nights with barely any sleep)  I remember the Drill Sergeants saying: “You have two choices after breakfast, sleep or sick call.” At this point, it hurt to even walk, so sick call it was.

In the clinic, I was put in a room with three other Soldiers, all males, and I’m not sure that was even appropriate or legal (did HIPPA even exist? [Editor’s Note: Yes]). A tech came in and asked each of us what our ailments were. I told him it hurt to walk and that if I even hit a rock with my foot the pain shot up my leg into my hip. So he proceeded to grab my leg as I lay on the exam table and hit the bottom of my foot. I nearly jumped off the bed and hit him, the pain was excruciating. He sent me for x-rays before seeing the Doc.

After my x-rays, I was separated from the group, and put into a room alone. A Colonel came in, the first time I had ever seen an officer in basic. He was an older gentleman and his first words to me were: “When did you injure yourself?” I told him it was sometime at the beginning of training, maybe the 3rd week or so. He looked at me in disbelief. “You’ve been walking around injured this whole time?” Yes, sir, I need to complete basic training, I can’t be held back, my children are waiting for me.”

He told me that I had managed to break my lateral pubic ramus in two places and he could not explain how I managed to make it to my final week without being seen. Again, I explained to him, “I am here for my children, I can’t be recycled. Please just let me walk until graduation so that I can go home.”

He said the only way he would let me walk out of the clinic without crutches was if I could hop on one foot. He made me hop on the good leg then the side that hurt. I gritted my teeth and hopped, he looked at me and said, “You are a determined young woman and I respect that.” He gave me a walking profile that expired the night before graduation. We could not graduate if we had a profile that extended past graduation. He told me his only stipulation was that I get seen when I got to AIT and not continue to suck it up–which I promised to do.

When I got back to my platoon, they were in the DFAC eating lunch. I walked up to my Drill SGT and handed him my profile. He crushed it up into a ball and threw it at my face. I picked it up and walked away. Every day until graduation, he tasked me to be the road guard in formation (you run out of your place in formation each time the platoon has to cross a road). I did what I was told, and wish I had known he couldn’t make me run. But I did it. I ran at each crossing, all the way up to the theater where we were graduating.

No one was there cheering me on. I didn’t tell anyone when I was graduating. When my name was called I walked across that stage: head held high, back straight, and shoulders back. I gritted my teeth, and made sure I didn’t limp even once. I wanted to cry, all I could think about were my children. I did it  Denise, Toni and Mikey, mommy did it! I did it for them. It was the beginning of a better life for all of us.

Why did I tell you all this? Remember that Detachment Sergeant who said I was not a mother, that I was a  Soldier? He was wrong. I will always be a mother first, Soldier second, and proud to be both.

Do not assume that because a woman is a mother she lacks the motivation to be the best. Women throughout history have sacrificed their lives to protect their families, and many have fought alongside men when women were still considered weak and our place was at home. Those women are my heroes. They showed me that determination and unconditional love are a woman’s greatest weapons.

So yes, I AM A MOTHER AND A SOLDIER.

Mirna Velez De Mansilla served more than 20 years in the U.S. Army as a (68D) surgical technician in various clinical and operational assignments at Fort Bragg, NC as well as Landstuhl and Baumholder Germany with three deployments to Iraq and Afghanistan. She is a beloved mother of five children and lives in Texas with her loving husband. She also has the best adopted hermano anyone could ask for.