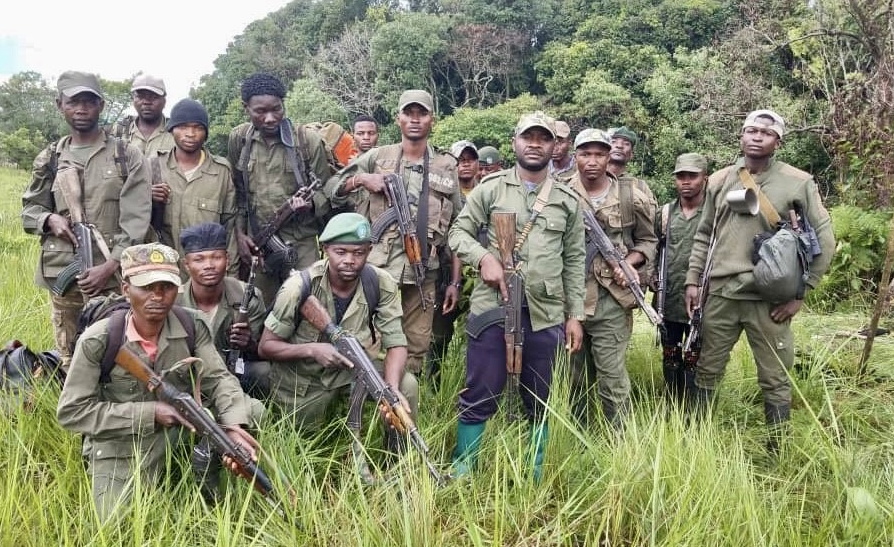 The sun was just setting on the thick canopy of trees and bushes surrounding their position. It was a long day of humping through the dense growth, but it had been productive. The Rangers were able to track down a criminal and effect an arrest. Now, they would escort him back to the nearest village to stand trial. Major Fils knew it would take many hours of walking to get within comms range, so he had his men set up camp off the foot trail and a little way into the thicket. They’d spend the night here and step off before first light tomorrow. This spot might provide some cover from the local Mai Mai militiamen if they were being tracked. The men set up a patrol base with interlocking fields of fire, grabbed water, and started preparing chow for the night.

Fils marked down his grid position and tried to radio in his location to the base. Unfortunately, his Thuraya couldn’t pierce through the dense vegetation; tonight they would be alone. If they were to make contact with the enemy, they could only rely on themselves to fight off the force. Fils, wearing olive-drab fatigues raised his canteen to his lips and sipped some water. He took a deep breath through his nostrils, inhaling the smell of goat meat and vegetables being prepared for dinner.

The Major waited for his men to finish eating before taking chow; the men always eat first, then the commander takes his rations. He slung his AK-47 over his back and ripped a chunk of meat off the bone with his teeth. As he grabbed for a carrot, he heard a twig break 70 or 80 meters away. He looked over, scanning the tree line, trying to find the source. The bushland got quiet. Fils’ pupils dilated as he looked into the dark growth. He began concentrating on a small, unnatural-looking spot. It was white and reflected a bit of light from the moon. Everything became eerily still, until… it blinked. “ENEMY,” Fils screamed! Then, all hell broke loose.

Fire erupted from different sides of the patrol base. The Rangers threw down their chow, grabbed their weapons, and engaged the enemy. Major Fils had his squad leaders directing fire on the element, and tried, on the off chance it might work, to reach headquarters to let them know the situation. Bullets zipped by his head as he returned rounds, unable to raise communications with anyone. The 18-man force, low on ammunition, was able to lay down gunfire with their only PKM (7.62 caliber general purpose machine-gun). Their gunner, Corporal Delongolas, laying prone behind the weapon, pressed the butt-stock deep into his shoulder pocket and courageously rained fire onto the Mai Mai positions; after a sustained engagement of nearly an hour, the enemy forces realized they could not win against the Rangers, and retreated into the darkness.

The smell of burnt gunpowder filled the air. Slowly, the silence dissipated, and sounds of woodland creatures returned. Fils ordered his men to remain in position, with 100% security, while he checked each man. Making his way through the patrol base, he realized some of his Rangers had been wounded during the engagement. As Fils crouched down to make his way to the last group of troops, he could hear crying from one of the men. Under the small amount of light emanating from the campfire, he could see that one of them was not moving. He approached the troop, slowly realizing it was Kaloba – a tall, wiry young man who grew up in a small village not far from this spot. Once the Major saw the extent of his wounds, and the blood-soaked earth beneath him, he realized there was nothing that could be done – Kaloba was dead.

As a veteran of the Second Congo War, Fils was no stranger to seeing death first-hand. He ordered his men to collect Kaloba’s weapon and ammunition, divide it among the squads, and put a blanket over the body. Kaloba’s closest friends carried out the orders, while the rest of the Rangers pulled security, ready to fight off any further attacks. Fils had multiple troops in need of medical attention, as well as the remains of one of his men that needed to be transported. Moving Kaloba, and evacuating the wounded now, would mean crossing steep mountains, thick vegetation, poisonous wildlife, and traversing a pitch-black forest. It was impossible. “The wounded stay here, with first squad providing security. Second squad, we need to get to the top of this mountain to get comms,” he told the men, pointing at the crest. “We move now.” The squad grabbed their gear and headed up one of the many peaks in the Upemba National Forest.

Upemba is located in the Southeastern Democratic Republic of the Congo (DRC), covering over 5,000 square miles of bio-diverse terrain; tall mountains and deep valleys define this beautiful wilderness. Unfortunately, due to the economic toll, the coronavirus has had on the DRC’s economy, money has become more scarce. As funding shrinks, the Rangers are unable to patrol as often or as long, which gives the Mai Mai an opportunity to conduct illegal mining activity or to kill animals for ivory. Slowly, some of these species, including the African Forest Elephant, are being killed off at rates faster than they can be replaced. The Rangers are limited to just a few vehicles, old weapons, outdated communications equipment, and only intermittent training as instructors become available. The wildlife and the Rangers are intimately linked together; without one, the other ceases to exist. To help the animals, one must help the Rangers.

The element made their way through the wilderness, tactically moving in darkness. The tree canopy began to thin as the patrol reached higher elevation, and the moonlight provided just enough illumination to traverse the terrain. They moved with their weapons at the “low-ready position,” cognizant the enemy may be in the area, but still moving at an efficient enough pace to make good time. After many hours of humping in the wilderness, they made it to the top.

Major Fils grabbed his handset and slowly raised it to his lips; his face unshaven from multiple days in the field. He paused a second, then keyed the mic, “Ranger Base, this is Ranger Team Charlie.”

“Team Charlie, this is Base. What is your traffic?” headquarters replied.

“Ranger Base, be advised, Team Charlie had troops in contact. We have casualties,” Fils related.

“What are the extent of the injuries,” headquarters questioned?

The Major gave all pertinent information to headquarters and headed back to the patrol base. After hours of driving and humping equipment through the unforgiving terrain, the Ranger Quick Reaction Force made it to their position with an evacuation team. They put the wounded, as well as the body of the fallen, onto litters and carefully carried them to the road, and into the waiting, and worn-down, Unimog (multi-utility trucks). The Rangers had a long, solemn ride back to headquarters; only the sounds of the truck engine revving, and the shock absorbers straining, could be heard during the trip home.

Upon arrival, the wounded were given immediate medical attention and Kaloba’s body was prepared for burial. The Rangers stood at attention as the flag-draped coffin was lowered to the ground. Tears streamed down the cheeks of Kaloba’s closest squadmates as red dirt began to fill the hole; they knew this was the last they would ever see of their friend. When the ceremony ended, the squads prepared for their next patrols; the best way to honor Kaloba’s sacrifice was to continue the mission he died supporting. Their duty to fight the Mai Mai would continue, despite being down several men.

For the Mai Mai, in a country where the average income is just over $2.25 a day, the risk of capture and prosecution is worth the reward. Literally translated as “Water, Water,” the “Mai Mai” believe they are protected by black magic; when enemy bullets hit their skin, they turn into water. Galvanized by this armor, these fighters, between 2005 and 2006, turned their operations area into the “Triangle of Death,” killing, raping, pillaging, razing villages, and displacing some 220,000 civilians in the area.

The Congolese army was able to quell the violence against humans, but these fighters have nevertheless managed to remain relevant, conducting illicit mining operations, as well as performing the dirty work in the illegal ivory trade. When these militiamen go into the bush, track down and kill an adult elephant, then successfully extract the tusks and smuggle them to a dealer, they receive around $1500 – roughly double what they would otherwise make in an entire year. Sometimes done in haste, for fear of being tracked and caught, these poachers will only manage to injure the animal before hacking the tusks out of the animal’s face while still alive. The Mai Mai inflict unthinkable pain and suffering before the elephant’s death. They have no empathy for other living creatures.

Unlike the Upemba Rangers, Mai Mai fighters have no regard for the laws, the environment, or the animals; they are simply driven by money. Though both the Mai Mai and the Rangers come from the same country, and even the same villages, what sets the Rangers apart from the Mai Mai is that they are motivated by doing what is right, enforcing the laws, and saving the wildlife. Although it is an uphill battle, both literally and figuratively, these Rangers will continue to patrol for the good of the environment, and the animals.

Back at headquarters, a new squad of Rangers had been formed – cannibalized from the two that suffered major casualties a couple of days earlier. Each of the men loaded a magazine into the magwell of their AK-47 and charged the weapons. Major Fils and his men jumped onto the Unimogs and took a long trip back to where their friend, and fellow Ranger, had just died. With the memory of Kaloba in their thoughts, even if equipped with old gear and undermanned, the Upemba Rangers have the resolve to win the fight against the Mai Mai, protecting their park, and the wildlife that reside within its borders.

You can help protect the wildlife by supporting the Ranger mission…