HomeCultureMilitary“This is the Way”: An Apt but Dangerous Phrase for Warfare Today 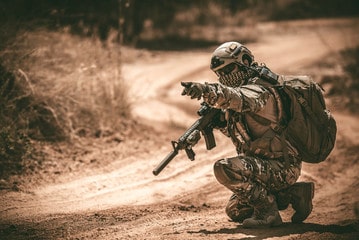 This first appeared in The Havok Journal on March 8, 2020.

Fans of the latest Disney + subscription series will recognize the mantra of the series protagonist the Mandalorian. The Mandalore are a warrior people who are the center of the series and whose beliefs are outlined and embodied by the main character. The main character and his people are conveyed as holding true to a long-forgotten path to achieve their ends, “This is the Way.” Disney may have unwittingly exposed an entire generation of warfighters to warfare’s 2020s version of “Embrace the Suck.”

“Embrace the suck” is a well-circulated catchphrase, mantra, and common military slang for:  “To consciously accept or appreciate something that is extremely unpleasant but unavoidable for forward progress”.[i] This phrase rose to prominence with Soldiers and Marines following the invasion of Iraq in 2003 and since has been the focus of hundreds of articles, speeches, and books. At its peak, the resonance of the phrase spoke to a generation of warfighters simply trying to provide the easiest context to their situation to both accept and push through their given circumstance to achieve their end state, a striking parallel to today.

“Embracing the Suck” in mentality became the pseudo mantra of U.S. military personnel across multiple areas of operation and across multiple generations of warfighters, but this is nothing new. In a short article Guy McCardle even draws the parallel to Shakespeare’s Henry VI, Part II citing “Let thee embrace me, sour adversity, for wise men say it is the wisest course” [ii] It is sound logic that a credo or mantra allows those that can’t understand the dynamic unknowable, a means to put into simple transferable and relatable words, the situation with which they find themselves.

The 9/11 wars have produced generations of warfighters across the globe. Perhaps the warfighting populace has become so used to the global war on terror that it expects the long war to continue indefinitely. As time goes on, phrases become mainstream and bastardized, overused and absorbed by groups on the outside looking in. The mantra then loses its significance to those that carried it. As something becomes overused and watered down by another cultural group chances are a new phrase that is relatable will usurp the former. At this point, a shift occurs and those original groups indoctrinate new phrases to capture their outlook.

Enter a new phrase that both encapsulates this same feeling and resonates within modern pop culture. Pop culture provided this through a Disney series with a relevant gun-slinging main character with a new yet relatable mindset. The character provides a way to capture one’s circumstances in summation and relate to others, especially those in their 19th year of continuous conflict spanning the globe. “This is the way”.

By acknowledging there is a routine means of executing daily roles and operations, forces can reaffirm their role within a very complex system. As the future unfolds, t-shirts, bumper stickers, and pending books will surely absorb the This is the way mantra and begins to unpack how it relates to things such as civilian business models and mentalities within stateside day-to-day operations. The only danger is allowing the mantra to reinforce negative gaps and seams within systems.

This is the way mentality can very easily slip into a mental state of apathy and indecision, instead of bucking routine approaches and trying to adapt them for the better. This is the way can slip into a passive approach to letting the system maintain its current glide path. The phrase runs the risk of becoming an updated “Well, this is how we’ve always done things”. Although it provides an acceptance and way to understand one’s position within a system it draws dangerous allures to accepting invalid methods or outdated techniques by justifying that; This is the way and always has been the way. This mindset can degrade and subjugate creative thinking and innovative ways to solve new problems in always adapting operational environments.

In conclusion, This is the way provides a simple sharable and culturally recognized mantra to relate to one’s position or beliefs in a system. As long as it is kept in that perspective it will remain valid. At a time when it becomes cliché or overused, it may run the risk of becoming a means to avoid or deter adaption and innovation. A system is only as valid as the completion of its intended end state. Mantras that reinforce that completion are a force multiplier, mantras that do not can become distractors or enact degradation. But for the time being, This is the way encapsulates the early 2020s willingness to believe in the integrity of the process, and to see that process to fruition. Anything that can assist in a dynamic global operational environment to bring order to chaos and shared understanding is in effect a positive sustain to current operations.

This is the way.

Major Joshua A. Lyons is a graduate of Indiana University Class of 06’ where he was commissioned as a United States Army Air Defense Officer. He holds a Master’s in Military Operational Arts and Science from the United States Air Force Air Command Staff College. He serves as the Active Defense Chief at the Army Air Missile Defense Command level within the Combined Air Operations Center. He additionally served a three-year tour as an Operational Advisor with the U.S. Army Asymmetric Warfare Group as a Troop Commander and the Group S-3. His other works include Defining Cross-Domain Maneuver for the 21st Century, the U.S. Army Travel Awareness Handbook, and multiple articles within the Small Arms Review and the Asymmetric Warfare Journal.