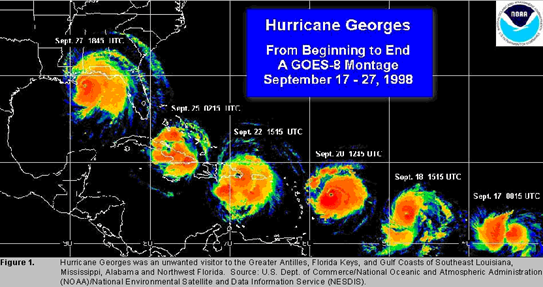 Army Special Operations Forces (SOF) have a long and distinguished record of exploits in combat. Lesser known however are the untold stories of SOF working around the globe in response to crises, be they man-made or natural. With distinctive skill sets, diplomatic acumen, and operational agility, SOF personnel are uniquely qualified to conduct time-sensitive collateral activities in response to urgent DoD requirements. What follows is one such story.

Over the Caribbean Sea, 19 September

The Hurricane Hunters were airborne.

Their quarry, “Georges,” a newly named hurricane that had formed on September 15 as a tropical depression some 300 miles south-southwest of the Cape Verde Islands in the far eastern Atlantic.

High above the tempest churning through the Caribbean Sea below, the WC-130 piloted by Major Dallas Englehart of the 53rd Weather Reconnaissance Squadron lowered further into the eye of the storm. Winds rocked the aircraft, as sheets of driving rain slashed at the cockpit windows. As the plane descended further into the eye of the storm, the bright blue calm sky above the storm turned an ominous gray.

As the plane buffed from the hurricane-force winds, the crew prepared to execute their mission. Onboard, SSgt Kari Kennedy released the dropsonde to obtain readings. As the reports came in, measurements indicated 148 mph winds and pressure dropping rapidly from 949 to 938 millibars.  Hurricane Georges was now a powerful Category 4 hurricane.

As Major Englehart and the crew peered out into the storm, the wall of clouds lining the “eye” created a so-called “stadium effect,” where the clouds produce the appearance of stairs of a stadium. They counted seven sets of “stairs” lining the walls of the eye, the most remarkable ever seen by the crew.

As they flew back toward their base in Biloxi, the crew thought about the track of the storm and hoped they would be spared its powerful wrath.

The Hurricane Hunter mission into the storm recorded flight-level winds up to 168 mph while dropsondes measured surface winds up to 175 mph. Just 24 hours later, Georges underwent a period of powerful and rapid intensification. Winds increased by 45 mph, attaining its highest sustained intensity of 155 mph winds, just below a Category 5 hurricane. Georges was now a monster storm, with an eye stretching 35 miles in diameter.

To the south on the Atlantic side of the Panama Canal, the calm breeze belied any indications of the fierce storm brewing further out at sea.

Under the sweltering tropical heat, the cool air conditioning of Battery Pratt was a welcome relief. A former 19th-century coastal artillery fortification, Battery Sedgwick Pratt had been converted into a facility for use by U.S. Army South, at Fort Sherman, Panama. With renovated interiors offering office space, billeting, and storage facilities, it was the perfect location for Charlie Company, 2nd Battalion, 3rd Special Forces Group (Airborne) to establish its headquarters while conducting jungle training at Fort Sherman.

For the past three weeks, Charlie Company had conducted a variety of team and company level training exercises in the tropical environment. As Fort Sherman was scheduled to be inactivated the next year, the base had only a small cadre of permanently assigned personnel, leaving the multitude of training ranges and facilities at the complete disposal of the Special Forces. The Company capitalized on the opportunity, conducting waterborne operations, live-fire training, and partnering with Delta Company, 160th Special Operations Aviation Regiment (SOAR) stationed at nearby Howard Air Force Base. With the 160th helicopter support, Charlie Company A-teams conducted a variety of training, including airborne operations, helo-casting in Lake Gatun, and Special Patrol Infiltration and Extraction System (SPIES) training.

Conducting training in the jungles of Panama proved invaluable to the Company. The 3rd Special Forces Group (Airborne,) headquartered at Fort Bragg, North Carolina, was responsible for providing the full spectrum of Special Operations capabilities in the Africa Command (AFRICOM) area of responsibility. At that time, the 3rd Special Forces Group consisted of three battalions. Two battalions with assigned areas of responsibility in Africa, while one battalion, the 2nd Battalion, had a geographic area orientation in the Caribbean. Operational A-Detachments of the 2nd Battalion routinely conducted training in the region and executed missions in support of U.S. Southern Command (SOUTHCOM) priorities. These missions predominately focused on training host nation military and security forces as part of Foreign Internal Defense and counter-narcotics missions.

As the unit was preparing to complete their training deployment, little interest was given to the hurricane now barreling its way through the Caribbean, its track clearly away from the Panama isthmus. Posing, no immediate risk, attention focused on training and preparing to redeploy to Fort Bragg.

As the afternoon’s training events concluded and the teams trickled back in from the field, the Company operations center phone rang, it was a call from Special Operations Command-South (SOCSOUTH), the Company Commander was needed urgently for a meeting at headquarters.