HomeCultureMilitaryD-Day & Beyond: Land of the Free Because of the Brave 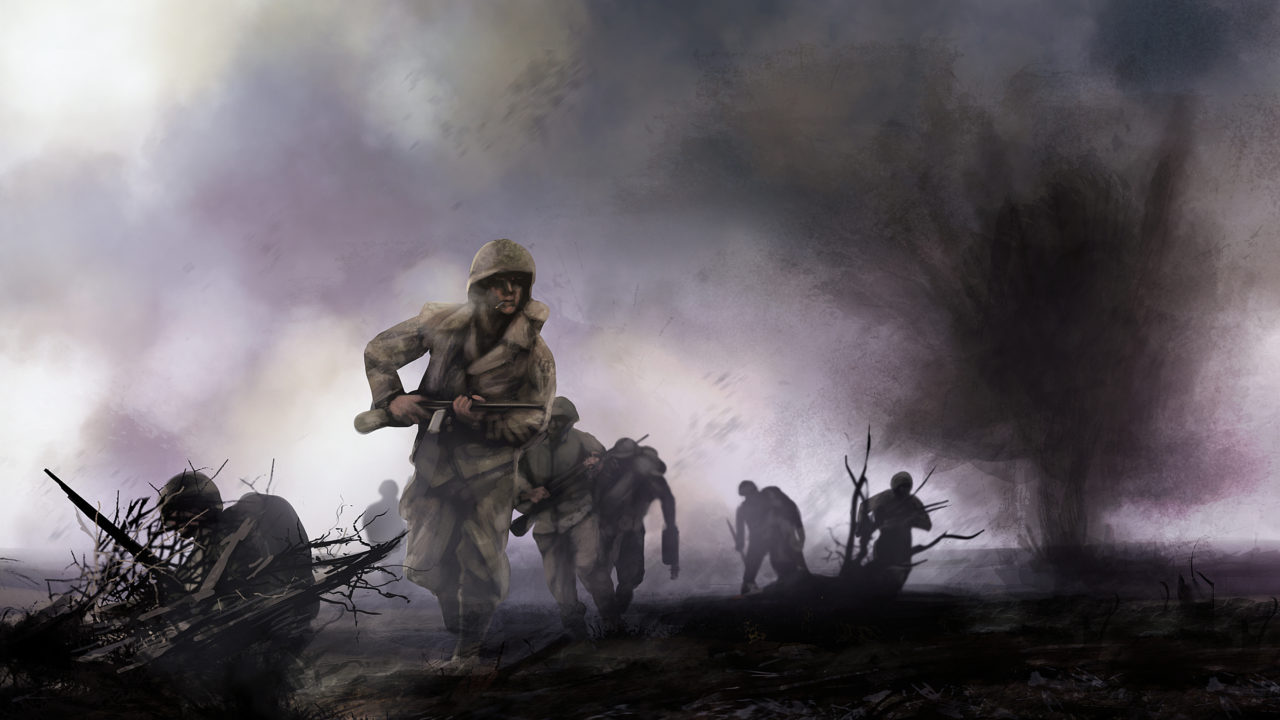 D-Day is certainly a day to be celebrated; but it is also important to recognize, for those who survived the jumps and beach landings, that day was just the start of a long, hedgerow to hedgerow fight across France towards Germany. This fighting included subsequent jumps behind enemy lines, including during daylight hours. After Normandy, the 101stand 82ndAirborne Divisions conducted another jump into Holland as part of Operation Market-Garden and helped hold the line during the Battle of the Bulge.  While their results in these operations did not match the success they achieved on D-Day, they continued to serve with distinction. Those who contend the Airborne was not successful in these particular battles should keep in mind their poor employment. The poor planning and misuse of the Airborne assets put these men in drastically outnumbered and outgunned fights.

Some paratroopers described the drops as “suicide missions,” and while they were well trained to perform their tough mission, many would not survive.[1]  In his book Currahee!, Donald Burgett recalls a story about three soldiers, where a captain tells them they were being sent behind enemy lines and “the reason we’re sending three of you . . . is that only one of you will get back; the other two will die.”[2]  He said, “[e]ach one of the soldiers glanced at his buddies, and thought to himself, ‘Gee, I’m going to miss these guys, and they’re such good guys, too.’”[3]  But that was the attitude of these young men.  It wasn’t going to happen to them, it would happen to the other guy.

Frank Denison, a private in the 326thAirborne Engineers in the 101stAirborne Division, backs up Burgett’s words by writing, “I didn’t think much about dying.  I had a job to do and I did it.  I figured I would live forever.  At that age, you don’t give a thought about dying.  It’s always the other guy, never you. Of course, the other guy, he thought the same thing.”[5]  Sergeant Charles Easter added, in a letter home before his death, he was so confident in himself and his unit, “we could win the war by ourselves. If Hitler ever heard about us he would stop the war tomorrow.”[6] These veterans’ attitudes portrayed the feelings of a young man’s invincibility, something that has not changed in the past 75 years.

Unfortunately, for so many, attitude is only part of combat, and there are 9,386 Americans who were laid to rest at the cemetery overlooking Omaha Beach, along with about 14,000 others who were sent home to be buried by their loved ones. Jack Agnew describes his comrades who were killed in action as young men who “lived each day as if it would be their last. Their lives [were] snuffed out at an early age.  They never [got] to realize their potential.”[7] Many of those who did not survive the initial days of battle in Europe were still very young. They faced their fears of death with a type of courage and confidence that bred great achievements on the battlefield.

The sons of America who served in the American Airborne Divisions suffered many losses as selfless servants of their nation.  For many, they lost their lives, dying in their youth, in a war they did not start. Others lost their limbs, making it through combat, but not without leaving part of themselves on the battlefield. One thing all of these young men sacrificed was their youth.[8] Their situation dictated they matured quickly; their mission was a serious matter.

75 years after the Airborne jumped into Normandy, the “Greatest Generation” continued to die off at a rate of about a thousand veterans per day. In their twilight years, Americans looked to the paratroopers of WWII as a source of strength and courage. Before September 11th, 2001, it was easy for later generations, in the absence of catastrophe or significant casualties in a conflict, to fail to appreciate the great sacrifices and contributions this generation made for America.

During WWII, the majority of the country rallied around the war effort. American society as a whole was greatly affected by the war, determined to make a positive contribution. The “Greatest Generation,” the military, in particular, lived at a time “when their days and nights should have been filled with innocent adventure, love, and the lessons of the workaday world, they were fighting, often hand-to-hand, in the most primitive conditions possible.”[9] War consumed their youth, forcing most to mature quickly, sending others to the grave in their prime. 291,557 American soldiers paid the ultimate sacrifice during WWII.[10] Yet, they went because times of peril made them appreciate freedom and liberty have a price.

Ironically, the attacks on the 11th of September came in the same month Major Dick Winters and the rest of Easy Company debuted in their HBO miniseries remake of Ambrose’s Band of Brothers.[11] The country searched for heroes in their time of fear and anger, and approximately nine million viewers found what they were looking for in a story about a bunch of old men that, in their youth, rose to the occasion and defeated a determined enemy. Screenplays and books such as Saving Private Ryan, Band of Brothers, The Filthy Thirteen, and CURRAHEE! serve as constant reminders Americans should continue to be resilient and courageous in the face of evil adversaries. In the past 17 years since the 9/11 attacks, America gained a newfound appreciation for the “Greatest Generation” because it must now carry the same torch of freedom the paratroopers did over seven decades ago.  The United States should revere what the paratroopers accomplished, and draw from their courage by reading their accounts and listening to their stories.

Colonel Edson D. Raff, in his book We Jumped to Fight, wrote that “Modern young men look to the sky for adventure, whether it be riding the air in a plane, in a glider or on a parachute.  Only a fraction of the last generation looked skyward; yet all of the next generation will.”[12]  The paratroopers of WWII, including the test platoon, the “Filthy Thirteen,” and Easy Company, paved the way for those who came after them. Their ingenuity, youth, spirit, and courage lives on in the American Airborne units still serving across the globe today. They created a culture that continues to breed success on the battlefield today. We should praise them as heroes, recognize their suffering, and never forget the sacrifices they endured so those of us alive today can enjoy the freedoms we possess, and the liberties so many take for granted. We truly are the land of the free because of the brave.  Airborne, All The Way!

Major Mike Kelvington grew up in Akron, Ohio. He is an Infantry Officer in the U.S. Army with ten deployments to Iraq and Afghanistan, including with the 75th Ranger Regiment and 82nd Airborne Division. He’s been awarded the Bronze Star Medal with Valor and two Purple Hearts for wounds sustained in combat. He is a graduate of the United States Military Academy at West Point and holds master’s degrees from both Princeton and Liberty Universities. The opinions expressed above are his own and do not represent the official position of the U.S. Army, the Department of Defense, or the U.S. Government.

This first appeared in The Havok Journal on June 6, 2019.