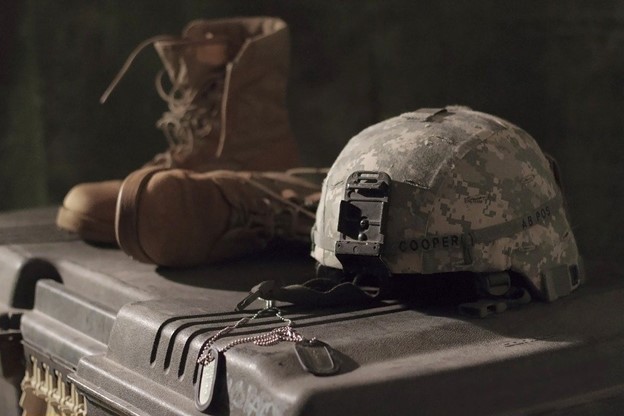 This originally published in Frank’s blog on July 30, 2017. It is republished here with the author’s permission.

I went to the psych ward of the VA Hospital last night with some folks from the American Legion. We brought snacks and drinks for the residents like we usually do. I talked with some of the vets for a while, and then I settled down into a chair next to the table that held the sodas and the cups of ice.

A nurse wheeled a guy into the break room. He was older than me; gaunt, with longish hair combed back from his forehead. His hair was streaked with grey, and his nose had been broken at one time and badly set. He had a drooping moustache and long, thin hands that trembled slightly. The man was unshaven and he looked tired. However, he smiled and greeted us.

I offered him a soda, and Sister Karen gave him a small plate of cookies. We introduced ourselves. The man in the wheelchair was named Jim.

I told him, “I was a helicopter pilot.”

“Well, I was in peacetime. I didn’t do anything that exciting.”

He got serious and said, “I don’t like to talk about it,” and he looked away.

I said, “My oldest boy fought in Iraq.”

“Not so much. He’s talking about going back. He wants to fight alongside the Kurds. He misses the war.”

Jim looked hard at me and said, “Some men are like that.”

Jim said, “My brother came back from the war after I did. He just sat in the kitchen of my folks’ house and smoked cigarettes, and he flicked the butts onto my mother’s floor. It was just a habit he had picked up, you know? Then, one day he took a gun and shot himself in the head.”

Jim continued, “He was the Marine. The tough guy.” Jim shook his head slowly.

Jim thought for a moment and said, “Well, maybe your son wants to do something good.” Then he paused and said quietly, “Maybe he wants to die.”

Even more quietly, I said, “Yeah, that could be.”

Jim told me, “I ran the VFW in Milwaukee for a while. Lots of guys committed suicide. They say that twenty guys do that every day. I think it’s more than that.”

Jim nibbled on a cookie from somebody else’s plate. He looked at me and said, “Well, if your son goes back there, you tell him that he’s doing a good thing. I mean with ISIS and all, he would be fighting against evil.”

Jim said, “One of my sons died a while ago. I just don’t know about it. They say it was a heart attack, but he was a forty-year-old construction worker. Do you think those guys die of heart attacks? It don’t seem right to me.”

I told him, “I’m the oldest of seven boys. Two of my brothers are dead. My father buried two of his sons. There’s nothing harder than that.”

Jim sighed. He said, “Everybody has to find their own path. You can’t choose it for them. You don’t know.”

Jim said, “Don’t do that. He has to find his own way. Maybe he has to go back there.”

Jim rolled his wheelchair away and watched the movie for a while. I left him alone.

It got time to leave, and I went up to Jim to say goodbye.

I said, “Well, thanks for talking with me. I’m glad that I got to meet you.”

Jim looked up from his wheelchair, and said, “I am glad that I talked with you. I learned a lot from you. You helped me to remember my brother and my son.”

I reached down and hugged him. He hugged me back. Hard.

He smiled and said, “Good night.”

This first appeared in The Havok Journal on February 16, 2021.