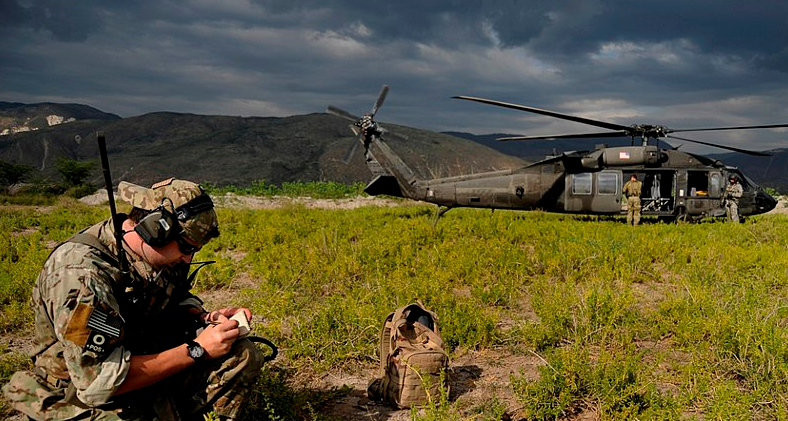 A red Toyota cargo van backs up to the EMEDS tent, brake lights flowing through the bitter dust that had been stirred up as the vehicle approached. Port au Prince slum “Cite de Soliel” is visible in a haze. Small fires dot the landscape and smoke drifts into my nostrils. This is the white smoke, organic material incinerating into the dusk air. “Organic” is the term we use to diminish the shock that of the 300,000 dead which have accumulated, there were too many to bury. So they burn and burn. For the next 50-something days the putrid tendrils of ash dance their way into our lungs as we suffocate for fresh air. We smoke French cigarettes, ensuring that we are in control of the elements entering our bodies.

The tail-ramp releases as metal slides on metal. I step up into the bed and grab a litter handle as my eyes lock into hers. Centuries and galaxies accelerate as the glance is exchanged but I shudder as I see her broken soul. Three hours ago a gang was wandering the spider’s web of shanties and tents that have overrun the city. They found her off-guard, all five of them savagely raping and beating her as they pleased. When they had grown bored, or tired, or distracted, they doused her in kerosene and set flame to her physical and mental being. She was found later amidst the anarchy by somebody who was too disturbed to pass her by while ignoring the other bodies.

I take a step off the rear ledge and catch the scent of her urine. I smell the feces of an entire city that utilizes water as a precious commodity. I smell myself, the last shower 8 days prior at Ft Bragg. I smell her burnt flesh and the acrid scent of melted fabric. It is 97 degrees, humid, and the Caribbean air sticks to my skin, yet she shivers. Hypothermia is combining with dehydration as she struggles to grasp the last ounce of life that remains.

An hour until helo curfew and two Sea Stallions rumble across the bay, vibrating every air molecule as they approach a ship staged away from the chaos that is Terminal Varreux.

I carry her into the tent as somebody holds the other end of the litter. The flap zips up to keep the dust and spirits out of the surgical unit. I do not see her for 8 hours as she is resuscitated to acceptable vital signs.

I return the next morning completely filthy, as I slather my hands in Purell. The nurse informs me that we will be performing skin debridement before cleansing the surface, finishing with a Silvadene application to fight infection. The look on the young girl is entirely horror and shame. The debridement brush may as well be a wire Brillo Pad and as I graze her naked skin the nurse instructs me to dig in, it is the only way. Silent tears pour from her brown eyes as capillary blood dots and bubbles to the surface.

She brings herself to a primal howl and the entire unit freezes to watch.

I continue to scrub, peeling flesh and causing her tortured pain so that she may begin to recover. The howl evens out to a whimper, as a bead of sweat rolls down my neck and cradles itself in the groove of my clavicle. The whimpers soften to a soothing rhythm as they begin to form a song that is foreign to my comprehension. Her crying is expressed through singing, as many of our patients would repeat.

The songs haunt me. They float to me in my wildest dreams. I light incense to reflect in my own home and sit dazed as I realize the smoke is spiraling, then hovering and drifting the same way as those white plumes did years ago.

Her voice comes to me when I am driving. Her voice invites me to dance while I am shopping for groceries, the meat section subduing my memories from past visits to a combat AOR.

Her voice is the lullaby that rocks me to sleep, too drunk and exhausted to cry tears. Her voice is my personal ghost, sitting on my shoulder reminding me of the daily scrubbings she endured for two weeks. The thought of her quality of life when she was released jabs me in my spirit.

I contemplate, I become stuck, I lose focus. I come back.

A howl, a whimper, a crescendo to musically float on through my consciousness.