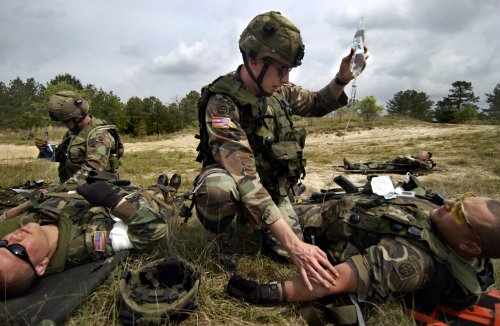 From the Next Generation Combat Medic Admins

Recently, GEN Joseph Votel, commander of Central Command (CENTCOM) mandated that allilitary personnel deploying to the CENTCOM Area of Operations (AO) must have completed Tactical Combat Casualty Care (TCCC) training. However, the Department of Defense (DoD) greatly expanded upon this initiative. DoD Instruction (DoDI) 1322.24, released on March 16, 2018, mandated TCCC as the standard for all prehospital medical care across the DoD.

Most service members have at least heard of TCCC, if not completed training in some form throughout their career. In short, TCCC is a set of evidence-based best-practice prehospital trauma care guidelines, customized for battlefield use, that are reviewed and updated by the Committee on TCCC (CoTCCC) on an ongoing basis. Currently, the CoTCCC reports to the Defense Health Agency (DHA). With this mandate, therefore, DHA will be responsible for building, maintaining, and disseminating course materials.

TCCC is based on CAPT (R) Frank K. Butler’s 1996 supplement in Military Medicine, Tactical Combat Casualty Care in Special Operations. The goals of TCCC are: 1) treat the casualty, 2) prevent additional casualties, and 3) complete the mission. These goals are in place to stop the three leading causes of preventable death:

– massive bleeding from an extremity

So, what does this mean for you?

If you are deploying to a combat zone, you must complete a TCCC course “within 12 months before departure.” Ideally, this would be completed with the unit, as enlisted medical personnel have the necessary skills and training to effectively teach a TCCC-AC course. The TCCC-AC is designed to be completed in an 8-hour period of instruction but could be expanded to meet the objectives of the command or the medical leadership. Furthermore, all active duty service members will complete TCCC recertification every 3 years. At a minimum, all reserve component Service members must complete TCCC certification, recertification, or refresher training within 12 months before deployment.

How will this impact the DoD?

First, component services are responsible for ensuring their medical training programs are in keeping with the most current TCCC guidelines. This will mean more emphasis from medical leadership and require ownership and buy-in from all command teams. Success in implementing unit-wide TCCC has been demonstrated in both the 75th Ranger Regiment and the Canadian Armed Forces due, in part, to strong command support. These units taught every Soldier TCCC and have proven that it is possible to train every assigned person how to render appropriate care at the point of injury (POI). These efforts resulted in the virtual elimination of preventable deaths in the prehospital setting.

To be clear, these are baseline medical skills, but there are significant implications for the DoD as a whole. Work by COL (R) Brian Eastridge and colleagues showed the DoD has about a 25% potentially survivable death rate. 25% of Soldiers that die from injuries could be saved with correct and prompt medical care. A culture change is needed within the DoD, a change in mindset that makes medical training a priority, next to marksmanship and physical fitness.

Certainly, there will be some costs associated with this effort, and commanders may have to make difficult decisions about their budget. But, these decisions to ensure units are trained in TCCC can, and will, save lives.

Staying on Top of Preventable Death

It is important to also note that TCCC medical training that is being taught is updated often; in fact, there were two updates in 2017 alone. Although this may seem stressful, there are reliable avenues for pushing out updates easily.  Furthermore, these updates are based on the latest in evidence-based care, and are released because they will improve outcomes from injury.  Even though you’ll only be required to recertify every three years, you will get the best and most up-to-date information within 12 months of your deployment.

There is a movement afoot which has been gaining immense traction across the DoD, with a new focus on prioritizing service members’ lives as part of the mission, rather than as part of a risk mitigation matrix. It has spread to the highest echelons of command and is now disseminating its way back down to the line where it began. This movement of preventing the unnecessary loss of life, born in the 90’s, and grown in the Global War on Terror, has now matured into the quintessential medical guidelines for the prehospital combat setting, effectively known as Tactical Combat Casualty Care.