HomeCultureMilitaryOne Hell of a Ride Back to the FOB 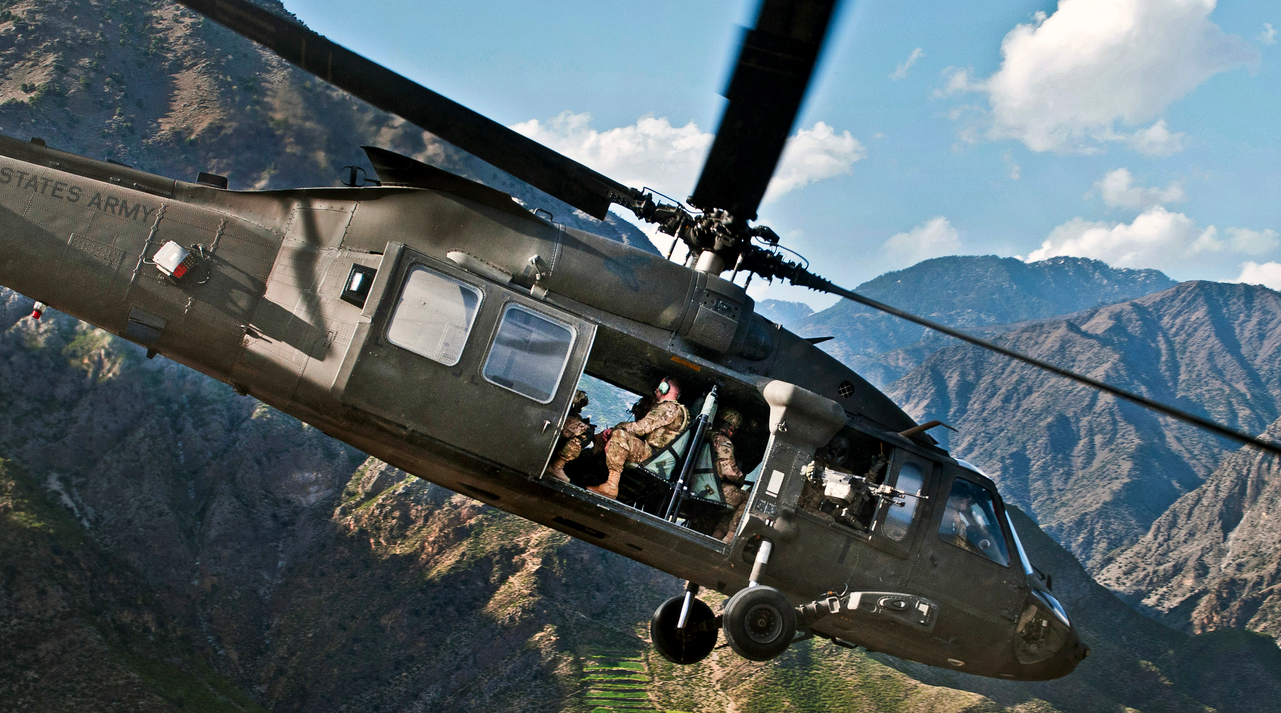 There I was laying on my back in a ditch. Everything flashing before my eyes, in an empty silence. “What just happened, no way did that just happened. Shit, we crashed… we crashed,” my inner voice yelling at me to open my eyes.

There the silence subsided, my senses restarted I gasped for air, “I am alive.” 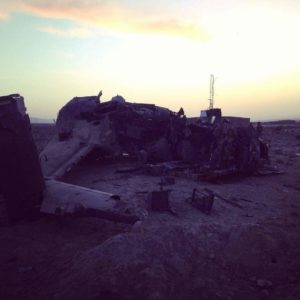 The dust is finally settling I have to move… I must move everyone is screaming for help. “Uh, my legs do they work? Yes, they do.” Carlos stop stalling and get up.

I jump to my feet running to the Blackhawk. “Ryan are you there? Alex are you okay? Dubus where are you? Hester, can you hear me? Kris answer me!”

“Hey Tech I am here, Kris can you walk?”

I run to the left side of the bird and it is on fire. The LT is laying right next to it, “Hey sir, can you get up? I need all the help I can get. The LT says “Roger, I will get up.”

I ran into the fire and endured the flames grabbed some loose moon dust and threw it on the flames and luckily they subdued. Now on to the next thing… the pilots. “Hey, guys you okay?” I run to the right side and the panel is on his face, the gunner is hanging out of the window and the first pilot moans in pain, “help me, help me.”

I remove the display panel off of him and slowly drag him out. He grabs me and says “please help me.”

“What’s wrong brother? You are not bleeding…you weren’t punctured right?”

“Now the gunner… hey big boy, how are you doing?”

“I gotcha man, lean on me.” I grabbed his underarm and dragged him to a nearby crater and told him to stay put.

The local ANA dude sneaks up on me and spooked me. “Damn man, don’t sneak up on me.”

Thankfully the terp was also unharmed laying to the door gunner. “Hey John, ask him if they have security step up?”

“He says they do… he wants to know if you want water.”

I ran over to Hester, “Hey buddy, how are you doing? Shit dude, your arm man ain’t bad but your elbow looks weird. Are you bleeding? What hurts?”

“Can you walk man? Nah, okay. You need to stay here near the door gunner…it’s nothing too bad man.”

Suddenly there was Davis, screaming what happened ” Tech…Tech…Tech!”

Alex, we crashed. Alex was limping wondering back and forth so I took his helmet off and told him stay here with Hester. “Bramlett,” I yelled, “we need to get all the SI as much as possible, he replied yeah Roger. I yelled about the crash while mocking Alex, “Awww what happened bitch… we crashed.” Then came the moment I saw Dubus crawling with his arms and he was screaming “battalion!”

I was mentally saying to myself that we all must be a group of idiots that we can find any pleasure in all this and joke around at the same time.

What happened next was etched into my mind so vividly, as some of the screams subsided.  One was getting louder as I was making a mental count on where everyone was at. I had to go back into the bird and I thought it was Boles’s legs underneath and I was devastated, but Tyler was still inside and screaming for help. In my mind, I had to do something as it had already been about 30 minutes but felt like forever. I jumped back into the bird on my right-hand side and I see Tyler. I go to pull him with my left arm and the adrenaline was wearing out and pain took its place. Something was wrong with my left arm, I couldn’t close my hand.

My tricep felt cracked and my hip was completely jacked up. Every wasted movement looked more and more painful for Tyler, I told him just to hold his breath and I would give it all I had to get out. He acknowledged and held his breath and with one huge pull, I got him out of the bird where I took off his kit.  There was blood spewing from his mouth at this time. Pulling him out took so much out of me that I laid on the amount of dust along with the door gunner, I needed to catch my breath. As I got down I saw Boles and it all hit me hard who was underneath the bird.. it was Jake. 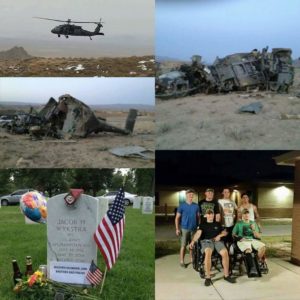 Tears came out of my eyes as Boles came up to me. He was asking if I was alright and needed water.

“Yeah man, where is everyone?”

Doc. Boles told me they are right behind them. I ran over to Doc and was like these guys need to get out of here quick and to check out Sykes since he was doing the worst.”

I ran to the other side of the bird and Nick was face down. I rolled him over as I saw Dubus screaming at the Hispanic private we had, “don’t do that my…pelvis is broken, asshole!”

I ran back to Tyler as we took indirect fire. I jumped on top of Tyler to protect him from the nearby dust that was blowing up. I yelled at Honaker to call up a fire mission to the north from what was briefed before we left. After 3 sets of mortar rounds they stopped, it was such a relief. I remember getting Tyler, Nick, and Dubus on the first flight back and waiting in a hole next to Ryan holding his hand and telling him and Hester that they will be alright. It was about 45 minutes till the next bird landed and I was running around calling for guys to help Hester and Ryan out.

Boles came to help me up since my leg stiffened and I told Boles that I could make it on my own. I have to put Hester and Ryan on next. I held both their hands praying that they would be alright. We landed at Fob Apache and helped the guys off. I reached our area and I saw our guys and everyone was tearing up. That’s when I went to Rivera who was upset that the medics dropped off Tyler and no one helped him. So I dropped my kit after telling them that everyone but Jake made it out. We all went quiet.

Then one of the medics came running, asking for me to get checked out. I refused, but Palmer and Rivera assured me that they would take care of the rest of the guys coming in. I walked by the QRF guys all ready to go out to help and the SF dudes that were at Apache.  I saw the guy we called “Superman” and he nodded, as to say good job. I nodded back and limped back to the role 3. After they bumbled around with me and I sat in the room getting a brand new private shaking to push through pain killers in an IV, they missed 3 times. I stood up and walked out and went to our tent, got my smoker’s jacket and a pack of cigarettes, and pissed by the medics sleeping bay. I limped back and there was Bramlett getting checked out and suddenly one medic was asking about the Hispanic casualty that ran out. I replied, “it was me… no worries… I was cold but I am back.”

Bram and I laughed and said, “Shit, that was a hell of a ride back.”

The PA came up to me and said I had to get back in a bird and fly to KAF even though I didn’t want to. I guess I had no choice. I was in the helicopter, in the gunner seat and Ryan was there trying to pull the pulse thing off his finger over and over. We landed at KAF and not in the smoothest of ways. I got off and started helping them get guys off.

This guy was screaming while he brought out a wheelchair, “where is the guy who can’t walk?”

I replied, “Sir, I walked all the way here on my own two feet and I am going in on my own.” 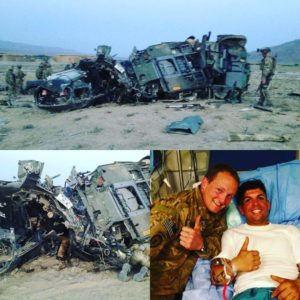 He didn’t argue and I saw 1st Sgt. O’Neil and Capt. Michelson at the door saluting the CO and O’Neil said, “Get inside Sgt. Techera and good job.”

I walked in and finally laid down on a bed with tons of navy nurses around me asking all these questions to see if I had TBI and to see if anything was broken. After MRI’s they told me that I had a cracked left arm’s tendons and stretched all of them along my left side, my right heel was cracked, my hip was out of the socket, and micro-fractures on my lower back.

When I got to a room with a TV I just passed out.

This article first appeared in The Havok Journal on July 16, 2018.