HomeCultureMilitary Misadventures: Tank You Very Much

I was having a good day.  I was a private in the army and I was just about done with Infantry OSUT at Fort Benning.  In fact, I was so close to being done, that I was assigned to a retirement parade to provide support for the live fire that was going on.

There were a few of us privates running around and we tried to do everything we were told to take care of while staying out of the way of the brass that we were just learning to properly relate too.  Prior to that day a Major was a rank I had just seen in the training manual, I had not seen anyone above Captain physically and now they were everywhere and I also saw a Medal of Honor recipient.  I started to salute him because I had seen a Lieutenant do it, even though he was a Staff Sergeant, and he laughed at me and told me to move out.

My drill sergeant took us to the back of a truck that was carrying big wooden crates.  The drill sergeant was pissed because they were late bringing the stuff on the truck.

The drill sergeant told us that we had to unload the truck and carry the boxes up the tanks that were parked at the front of the range.  I had never wanted to be a tanker and I really could not understand why they didn’t have to come get their own stuff.  I wanted to go by the machine guns but instead I had to climb up and start unloading this truck.

I climbed up on top of the boxes on the flatbed and found out we had a problem.  All the boxes were banded together with metal banding tape and I had no tools.

I called down looking for the driver or the drill sergeant or anyone who might have some pliers or something to cut this banding with but no luck.

They handed me the only cutting tool that they found, the axe.

I raised the single bit axe up over my head and was about to chop downward onto the metal banding when I heard someone yell, “HIT THE DIRT!”

I looked up startled and saw everyone around the bleachers, anyone who was just in the vicinity, hit the dirt.  People were diving off the stands, crawling away, a few tried to run but then dove like they were sliding into home base.

Officers and enlisted, seniors and juniors, all in their best Class A uniforms, laying flat on that red Georgia clay with their hands over their heads like there was going to be an explosion.  I looked at the firing line but everyone there was getting down too.  Everywhere I looked everyone was on the ground.

All but one, the drill sergeant stood next to the truck.

“Give me the axe private.” He said calmly, not the usual shout.

“But drill sergeant, I was just trying to…”  And I saw a new rank as an officer got up out of the dirt.  I had seen a picture of this one since he was the same rank at the Regimental Commander.  A full bird Colonel and he was covered in dirt.  And boy was he mad.  I mean he had streaks of red running down the sweat on his face and he looked like the devil himself.  He was trying to burn a hole right through me.

“Give me the axe private!” still not a shout but not to be argued with either.

“Yes Drill Sergeant.”  And I leaned over the side and handed him the axe.  I heard someone say, “All Clear.”  And the rest started getting up.  Some were laughing, some were pissed.  That red clay was never going to come out.

“Get down here private.”  And I went to the back of the truck to climb down.

The Colonel called the drill sergeant over and they were having what you might call a one sided conversation.   Lots of “Yes Sir, No Sir”, but the rest was all the Colonel. 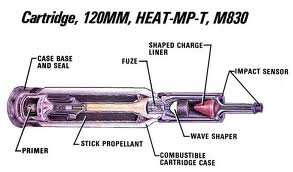 I got off the back of the truck and walked around to await the drill sergeant and stood at rest while he finished getting yelled at.  I was just trying to open a stupid box.  I could not understand what the fuss was all about.  I knew they were tank rounds.  They told us that.  But a tank round was just a big bullet.

Then I read right there on the side, High Explosive, 105 MM Anti-Tank.  Shit. Well, that explains everything…