HomeCultureMaking a Night Stalker: An Excerpt 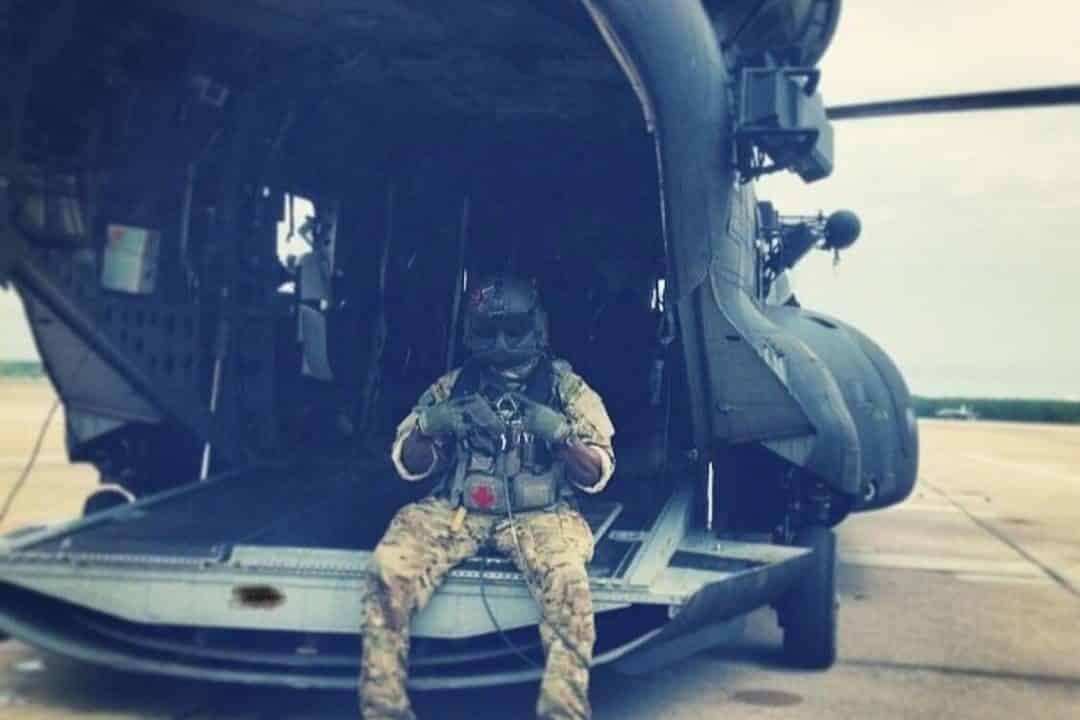 An excerpt from the highly rated book, Making a Night Stalker by David Burnett:

The target compound was 15 minutes away, and after our aircraft and chalk two completed a quick hover check to make sure the weight and balance was good, we got the all clear from tower. “Clear up?” The Godfather said. I glanced up to the sky and glared around to make sure nothing was landing or taking off around us.

“Clear up left,” I replied.

The engines growled and the bird lifted from the ground. I looked toward the back of the aircraft to see the distinct outline of chalk two start to pick up and follow right behind us. “Chalk two is off the ground and in formation,” SPC Andrew said over the ICS.

“Roger,” said CW4 Ray, the right seater. The cold air again, was beating across my face as we picked up speed and the aircraft pitched forward. All I could think about as I looked out at the mud hut riddled town below, was what’s going to happen when we get closer. I knew from the brief that SSG Atch had given us, that there was a high possibility of taking small arms fire, but I had no idea if that would lead to anything or even happen for that matter.

“Left and right side you’re cleared hot for test fire.” CW5 Frank informed the crew we were above a suitable test fire area. This wasn’t range 29A at Ft. Campbell anymore, this was the real deal. It was combat now, and more imperative than ever that all the guns on the aircraft were set up properly and completely functional.

“All guns hot, all guns test firing.” SSG Atch responded to the Godfather. SSG Atch had briefed us before the flight on how he wanted the test fire to be communicated to the pilots. After he made his call I flipped my mini gun to kill mode. The green light peeked through a piece of black electrical tape that had been taped over the light to conceal its glow. I pressed the two buttons on the spade grip like I had done so many times in BMQ. The gun roared and pelted the dusty sand below. The other weapons on board were being fired on either side by the other chiefs. The two M-240’s blasted and echoed from the rear of the cabin. I heard SSG Atch’s mini gun behind me boast the same unforgiving sound as my M-134. After a short three second burst and releasing my firmly pressed thumbs from the gun, I called, “Left gun cold, operational.” The calls made it around each station in a hurry.

He barely finished his call and CW5 Frank came over the radio through all the other chatter from the different players in the stack. “Roger guys, 10 minutes out,” he said in an elevated tone.

Then SSG Atch replied, “10 minutes forward ready.” As we heard the call, each one of us looked back in the cabin and held up both hands showing ten fingers while yelling to the barrel-chested Rangers.

“10 minutes,” I yelled as loud as I could over the noise of the engines and the blades cutting through the sky. My adrenaline started racing furiously as I turned back toward my gun and perched my head out of the window. I tried to get a glimpse in front of the helicopter to look for anything noticeable from the imagery that SSG Atch shared with us earlier.

The 6-minute call followed shortly after from the pilots and we all did the same thing as the ten-minute call, only holding up six fingers and yelling, “six minutes,” inside the cabin. Then the 3-minute call came, I felt the pitch of the aircraft change from a nose-down attitude to an upwards one, slowing the aircraft dramatically. While slowing down we crested over buildings and they were so clear. Probably because we were only 30-40 feet above them. I switched my gun from off to on and saw the green light illuminate underneath the tape. I didn’t want any light shining off of me to give the enemy a better target.

“One minute,” the Godfather said.

I turned around holding up one finger and yelled, “One minute.”

The Rangers heard the loud call and they began to prop up from their seated positions, eager to race off the helicopter upon landing.

This first appeared in The Havok Journal on December 12, 2018. You can continue reading the story written by David Burnett by purchasing the book on Kindle, Hardcover, or Paperback, purchase it here: ‘Making a Night Stalker.’

From Amazon.com: David Burnett takes readers into a unique world of the 160th Special Operations Aviation Regiment. His journey starts in a conventional Army unit where he doesn’t feel fulfilled in his duties and obligations. This lack of responsibility drives David to pursue the dream of becoming an MH-47G Chinook helicopter crew chief in the most secretive and elite aviation unit in the world.