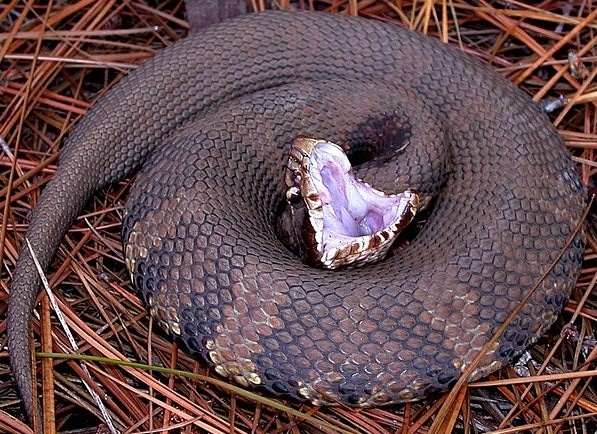 Oh, the things you’ll find on Facebook that will tear the scab clean off a deeply repressed memory.

When I was a warehouse foreman/traffic manager at the sawmill back in Tuscaloosa, I’d borrow people from the plant sometimes when too much had to get out in one day. One of them was usually Billy Dunn, one of the lathe mechanics, old but rawboned as hell, and the working definition of Appalachian hill folk. He was a good guy, and we ended up talking quite a bit. That’s how I eventually came to find out he was a Snake Handler. Capital letters because it wasn’t a side job, it was his religion. And how I learned I’d been wrong about what that denomination is all about.

I thought Snake Handlers worshiped snakes. No. They’re essentially Pentecostal; the copperheads and timber rattlers are just their “display of redemption”. It comes from a Bible verse; the saved taking up vipers and no harm will be done to them. Well ok. I wouldn’t read that as an instruction, but I’m not gonna badmouth a man’s Faith if he’s not hurting anyone with it.

But it preyed on my mind. The shop mechanic, Robert, was pretty intrigued too. Billy invited us to a service. I doubt Robert or I would have gone alone, but we told him we’d both be honored to be his guest some morning. Billy didn’t give us time to reconsider that. We went that Sunday.

It was DEEP in the boonies, this little chapel. There was a big piece of plywood nailed over the door with the name – it looked like someone just slapped that to it with a stiff paintbrush – “The Church of Jesus Christ With Signs Following”. Something close to that anyway. I was a little edgy. Robert too. What, exactly, is going to happen to us in there if they find out we’re Lutherans?

Maaaan, they were one of the warmest, most genuinely welcoming group of people I’ve ever been exposed to. I mean no disrespect or condescension at all by this, but there’s a pretty distinct hill folk look, and we didn’t have a trace of it. We stuck out enough to glow. But they didn’t treat us like they were welcoming us there, they treated us like we’d always BEEN there. It really was very touching.

Bluegrass gospel opened the service, a small group of guys playing up by the altar. In my entire life I’ve walked up on maybe seven men I instinctively knew I’d rather run away from than fight, and three of them were up there playing guitar. They were playing joyfully, they didn’t look mean or threatening. But I know the marks. These are guys who don’t have to behave if they don’t want to.

I’d assumed Snake Handling was just a version of Communion; at some point the Pastor would hold out a snake, surely sedated out of its little snake mind, and the congregants would pass by to touch it. Uh uh. The Right Reverend Flynn began to speak and people commenced to snatching very unsedated water moccasins and cane rattlers out of wooden boxes. Waving them around. Kissing them. Trying to hand them to US. This is more theology than I was really lookin’ for.

“Uhhh, Robert? Did you see where the back door was?.” I don’t think they have one, man. “Reckon where you think they WANT one?”