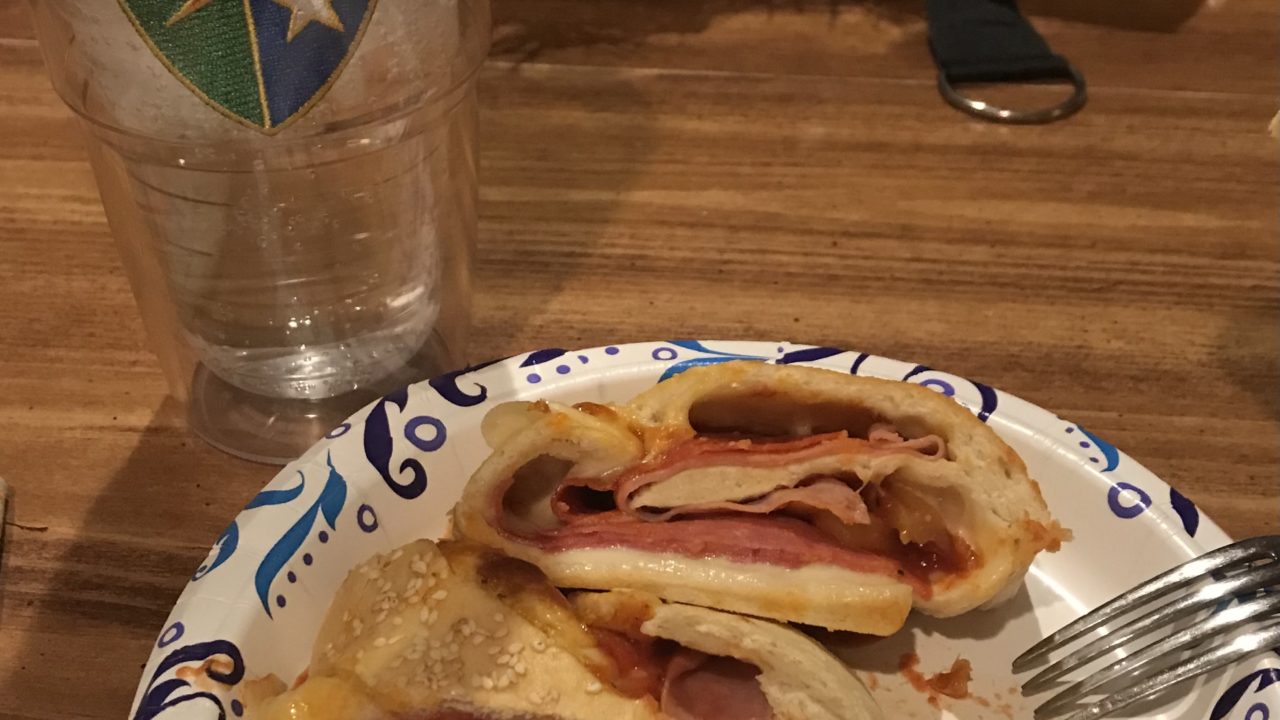 An unorthodox meal for the Christmas season, and one I haven’t made for a while.  Long before there were 4 kids, over a dozen deployments, and countless more responsibilities, there was Stromboli. In simpler times, three roommates lived in an apartment outside Fort Richardson, Alaska as Army Lieutenants preparing for their first combat tour. Paul was the cook, the one who enjoyed preparing dinner, and Jason and I didn’t mind. One of his expert meals, at least to the standard of 3 bachelors in a small apartment outside an Army base, was Stromboli.

Paul loved being an Infantry officer, God, guns, and Hank Williams Jr. He, along with my other roommate, Jason, were a year ahead of me. They showed me the ropes in both Anchorage and life as a platoon leader. One night, prior to our deployment, sitting on our couch after dinner and a couple of Mickey’s deep into the evening, Paul came up with the idea: we needed to make a pledge. We were all set to deploy to Iraq in the fall of 2006 during “the Surge.” If one of us died during our combat deployment, the other two had to promise to get one of those large “in loving memory” decals for the back of our trucks. At that time, we’d all lost friends and classmates, but we made the grim, sarcastic promise regardless. Of course, that would never happen to us.

Years later, after the death of both Paul and Jason in 2010 during separate combat rotations, Jason’s widow called me out on the pledge. In 2011, I finally made good on the promise. 9 years later, their decals remain proudly displayed in the back windows of my F250.  Seasons have come and gone, more moves and deployments, along with babies, promotions, and a string of injuries and surgeries leaving me to feel every bit the elder of my former youth. There’s not much left of the wars either, or the fruits of our labor, largely erased by ISIS, botched policy, and the failure to consolidate temporary military gains.

But the memory of Paul and Jason remain, as does Paul’s recipe. And so, during this holiday season, I drive my truck, I roll my dough, and I make my family Stromboli – never missing the opportunity to tell my kids stories about one of their “uncles.”  I am saddened by the losses of years past.  Paul and Jason, along with other fallen brothers, are never far from my mind. But I’m thankful for the opportunity to have known Jason and Paul, for another day on this earth, and to be home with family this year on Christmas. I try to live my life in a manner that honors the dead.  I don’t always do it well, but I give it my best every day.  Sometimes when the emotions of the holidays can become somewhat overwhelming, I remember the Stromboli.

Combine ¼ cup of warm water, yeast, and sugar in a bowl and stir to dissolve. Let it stand for about five minutes until it’s foamy. Then stir in the rest of the warm water, olive oil, and salt.  Begin adding the cups of flour, starting with 1 ½ – 2 cups, mixing it until smooth, then add more. The dough should be smooth enough to come away from the bowl when you’ve added the approximate amount in the ingredients. On a lightly floured surface, knead the dough for about 10 minutes, adding more flour if required.  Put the dough into a ball and place in a greased bowl and cover with a towel. Let the dough rise until doubled (this will take about an hour).

Ingredients for the filling:

Thinly sliced meats like ham, salami, pepperoni, and turkey (about a ½ pound)
Sliced cheese of your choice (about ¼ pound) – I like provolone and mozzarella
Sauce – Paul used to use Newman’s Own Basil tomato sauce, but shooter’s preference

Other toppings to consider:

Punch the dough down and cut it in half. Lightly flour a surface again and roll the dough halves into approximately a 10” x 8” rectangle. Arrange the toppings towards the top of the rectangle to facilitate the ability to roll them, leaving a couple of inches towards the bottom free of toppings – mix in the meats, cheese, and sauce. Then, roll the dough like a jelly roll, pinch the edges of the seam, and tuck the ends underneath.

Cut long diagonal slashes in the top of the loaves approximately every 3 inches. If you really want to church it up before throwing it in the oven, paint some of a beaten egg on the top of the loaf. Try to avoid the areas you just cut, then sprinkle the sesame or poppy seeds on top. Bake for about 30 minutes, or until there’s a golden brown surface on the bread.  Allow it to cool slightly prior to cutting. Enjoy, remember, give thanks. Cheers!

REMEMBERING MY FALLEN BROTHERS AND ROOMMATES

CPT Paul W. Peña, 27, of San Marcos, Texas passed away Jan. 19, 2010, in Arghandab River Valley, Afghanistan, of wounds suffered when enemy forces attacked his unit with an improvised explosive device. He was born July 8, 1982, in San Antonio. He was a member of the Junior ROTC at the San Marcos Baptist Academy where he was named “best all-around student” by his school’s National Honor Society chapter and was voted most likely to succeed by his classmates. He created a disc golf course at the school for his Eagle Scout project. Peña graduated from the San Marcos Baptist Academy in 2000 and entered the U.S. Military Academy as a member of the class of 2004.

CPT Jason E. Holbrook, 28, died of wounds sustained from an IED blast during a combat reconnaissance patrol. He was a Special Forces Operational Detachment-Alpha team leader assigned to Company C, 1st Battalion, 3rd Special Forces Group (Airborne). He deployed in support of Operation Enduring Freedom in July 2010 as a member of the Combined Joint Special Operations Task Force – Afghanistan. This was his second deployment.

Holbrook, a native of Burnet, Texas, was accepted to the United States Military Academy where he majored in Environmental Science. Capt. Holbrook’s first assignment was as a Rifle Platoon Leader in Alpha Company, 1st Battalion, 501st (Airborne) at Fort Richardson, Alaska. He served there for three years and deployed with the unit to Iraq between 2006 and 2007.

This first appeared in The Havok Journal on December 22, 2020.