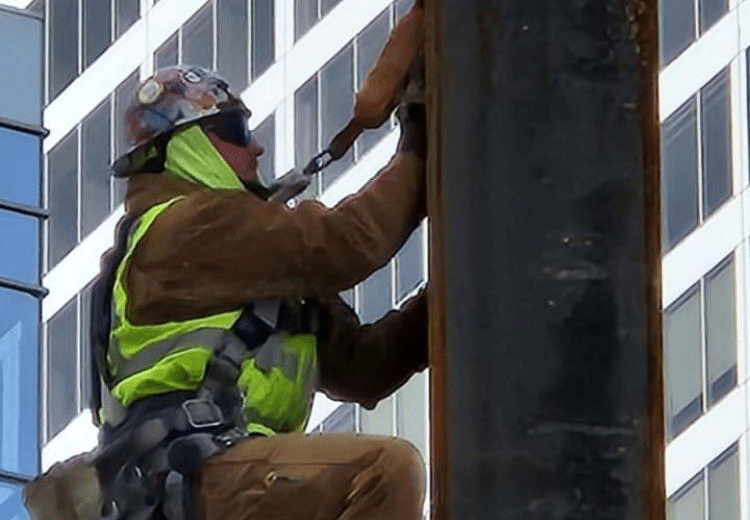 My youngest son, Stefan, is a journeyman in the Ironworkers Union. It is likely that he will become a certified welding instructor in the spring. In the meantime, he works at various job sites, erecting steel frames for buildings. Sometimes, he welds. Sometimes, he does grunt work. Sometimes, the work is tedious, and sometimes it is more interesting than it needs to be.

Stefan occasionally visits our house after his shift is done. He usually looks dead tired. If he’s had an exciting day, he’ll say something like, “Yeah, we did some fucking sketchy shit today.”

I always ask him to elaborate on that because I can tell he is just aching to tell his story.

He generally has a good story. “Sketchy” is a euphemism for “dangerous.” In his line of work, it is common for him to be doing things that are dangerous. Ironworkers often get hurt. He has a friend who was injured in a welding accident and wound up with third-degree burns. So far, Stefan has been lucky. Stefan is careful and safety conscious, but he is required to do work that most rational people would avoid. He walks on steel beams fifty feet in the air. He stands in a swaying lift and tries to weld metal to metal. He catches sections of steel that some crane operator is flying toward him. He is often in harm’s way, and he seems to prefer it like that.

On rare occasions, Stefan provides me with photographic evidence of his sketchy activities. Recently, he was working at a job site in downtown Milwaukee, when it was brutally cold outside. He was welding on some steel pillars that were part of a framework for a new skyscraper. Here are the pictures:

What he was doing on the job site was clearly nuts. On the other hand, when I was his age, I was an Army aviator flying Back Hawks for a living. His work seems to be age appropriate.

I admire Stefan’s courage. He is a brave man. I have heard people say that he is “fearless.” That is incorrect. He has plenty of fear. Only a fool would not be afraid, and Stefan is not a fool. A courageous person is afraid, but he or she does what needs to be done despite that fear. They keep going.

Anybody with military experience knows what it is like to do sketchy shit. We all did things that were objectively crazy but still needed to be done. There are plenty of people in professions that require sketchy work: police, firefighters, nurses, mine workers, the social workers in CPS, and the folks who repair power lines. Not everyone works in a cubicle. Thank God for that.

I admire courage. Courage comes in a variety of forms. Not everybody needs to risk life and limb. I know a young woman who is battling an addiction. She is the bravest person I have ever met. I know a couple who are caring for an elderly parent whose health is failing. What they are doing is nothing short of heroic. I have a brother who just turned 60. He and his wife recently adopted a 4-year-old boy. That’s a bold move.

A brave person is not a braggart. He or she simply finds the strength within themselves to do the right thing.

Even when it’s sketchy shit.

Frank (Francis) Pauc is a graduate of West Point, Class of 1980. He completed the Military Intelligent Basic Course at Fort Huachuca and then went to Flight School at Fort Rucker. Frank was stationed with the 3rd Armor Division in West Germany at Fliegerhorst Airfield from December 1981 to January 1985. He flew Hueys and Black Hawks and was next assigned to the 7th Infantry Division at Fort Ord, CA. He got the hell out of the Army in August 1986.