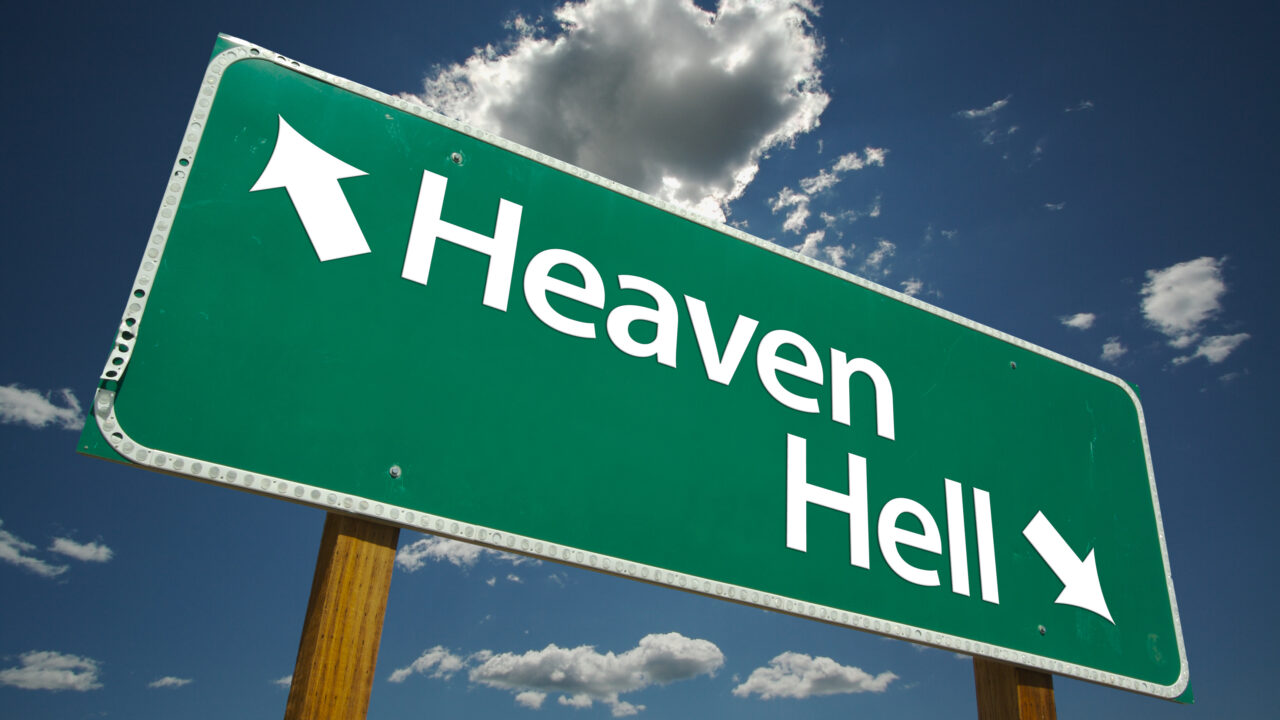 The oldest mystery in the world, the continuous mystery, the search for the final truth, what lies on the other side of death? Everyone faces this question and searches for the answer in theology, science, mysticism, or whatever. But we still don’t know.

What is on the other side? When we sleep, is that what death is like? Complete silence of the conscious mind and darkness? Or is there a place, a heaven, which wonder and fulfillment are yours for the asking?

Is heaven wishful thinking or by wishing for it, we fulfill it? Is the eternity just the last firing of synapses in our brain as it finally dies?

No one knows the answer to these questions. No one, who has died, has come back to say what is next. We must accept our ignorance and in doing so, we create fear. The fear of the unknown haunts us and taunts us. Religions use the fear of death to hound us and control us while philosophers encourage us to contemplate the silence as if the last note of an orchestra contains all the meaning in the world.

And with all this fear, we still have those poor lost souls who run towards death as a shelter from the life they wish to escape. The demons in their living minds have plagued them and scoured they’re until the unknown is a better or at least less feared place than their current existence puts them.

Perhaps and perhaps not.

Everywhere in our lives, we see fear. It all distills down to the final moments of life for the ending of life is where we are at our most vulnerable and yet no matter how we die, we don’t know what we will face. Others use that against us. Religions frighten us so that we might obey. Governments control us for the same reasons and criminals can use that fear to take from us with impunity.

Everything, we know about life, is set against the fear of death, and I wonder if that ingrained superstition is another reason someone, who is hurting so badly, justifies the need to kill themselves. They seek to punish themselves for the pain in their minds. This is a supposition, not a judgment.

I think about a vision of heaven, and I wonder. Is it fishing on your favorite stream, parachute jumping and viewing a spectacular vista, sex with a beautiful partner any moment you desire it? Or do we sit around on clouds and play harps? That would be boring as fuck. Can we roam the cosmos as pure energy and see all the wonder of creation and answer all the questions we don’t know the answer to?

Or do we start over because we did not learn what we needed to learn? There are as many ideas about death as there are people.

I would want heaven to be something that made me happy. A good book, a pipe, a beer, warm sunshine on me, and a fresh breeze as I read. That would be a version of heaven. A woman who loved me and whom I loved sitting beside me to talk. A dog at our feet that played fetch or provided love and companionship. That image could be a perfect version of heaven.

Or I could sail the galaxy and see everything that I can only stare up in wonder at now. Tiny points of light that show a vista beyond what our little world has to offer.

This is where religion fails for me. Why would an all-powerful God create a place where I got all my dreams just because I was semi versed in his/her liturgy and attempted to live vaguely in accordance with the prescribed texts of his/her will?

Cosmically, we are not worth that much. That is not a verdict on you but seriously, we live less than 100 years for the vast majority, a lot less in the poorer countries, but somehow we are all going to get peaches and cream, and buxom blond to share eternity with, and a beautiful house on the hill for little to no effort? Eternity for pocket change?

And if that is not what heaven is, then what is it? Do we just sit as a mote of consciousness against the vastness of the universe with no real comprehension of how vast it is? What does an ant see when it looks up?

Again I must profess, I don’t know.

Not knowing does not make me feel lost or alone. I am concerned about death as much as the next person I guess but I don’t let it rule me. It will happen when it does. Part of this is my stubborn nature, and part of this is learned. If you fear something enough, someone else can use it to control you. And the most dangerous person, to exert that control, is you.

We are the most dangerous threats we will ever face because we cannot escape ourselves. I don’t even know that death will free us from ourselves. How can it unless the only thing, that comes after, is oblivion?

It really makes no difference what you believe. There are only four logical options. Either we have heaven, in whatever guise suits us best with options to change and expand. We have a hell for which we are punished continually or only exist in a gray and pathetic place where we don’t want to be. We come back and start over in an attempt to learn what we missed the last go around. Or we end with nothing left to show for our existence but the decaying remains of our organic shell buried in the dirt.

And no matter which of those options you believe, rushing towards them by the barrel of a gun, a rope, a blade, pills, or any of the other creative ways that people have used is pointless.

Sure if you knew that heaven was just around the corner you would be a fool not just to dive right in and head for happiness but do you really think that is what it is? Do you believe that enough to check out and go?

It is not about risk or reward really. It is about leaving things unfinished or broken. And a suicide leaves everything incomplete and very much broken. Suicide is an emotional bomb blast with unimaginable range. Neither the reward in a supposed heaven nor the punishment of an imagined hell is worth the damage that event will do to those left behind.

If you are thinking about suicide, think about those four possibilities. One in four to obtain a better outcome is shitty odds to bet your eternity against.

I have been there. It will get better if you work at it.

Leonard O. Benton is retired from active duty military service with 24 years and two combat deployments to Iraq. He left the Regular Army after 10 years and became a National Guard Recruiter for his first tour in the AGR program followed by over 10 years in Operations as Force Protection, CBRN, and three years as C-IED. He has an Associates degree and is currently working on his Bachelor’s. He is an amateur metal smith and when he is not working or writing he can often be found in his shop pounding away in the attempt to transform a lump of metal into an icon of beauty or function.

This first appeared in The Havok Journal on January 23, 2015.