“We live in a world where unfortunately the distinction between true and false appears to become increasingly blurred by manipulation of facts, by exploitation of uncritical minds, and by the pollution of the language.”

As Americans, we are not only afforded the right to dissent, but we are oftentimes *encouraged* to do so. We are constantly reminded that the institutions that define us require maintenance, checks and balances, some form of oversight. Most Americans contest neither the value nor the beauty of our right to free speech. 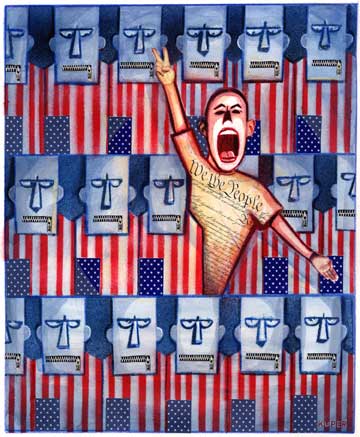 At the same time, a new epidemic is becoming more prevalent in modern America: the collective mindset that eschews all forms of principle in the name of rationalization. There is a distinction to be made between mindless obedience and dissent, but there is also a distinction to be made between dissent and the vehement rejection of common sense. I see a growing culture in America that has abandoned the pillars of principle for a world of analytic chaos.  In this world, so long as an argument that appears to bear the facets of rational thought has been employed, no matter the soundness and validity (or lack thereof),  the perspective is thought to be worth consideration.  In this world, we are seeing the rise of analytical entropy.

Our judicial system operates in this manner, but that is because our judicial system is designed *specifically* for the purposes of weighing the merits of an argument, holding it in consideration, and deciding whether or not said argument can be qualified. However, the world we live and breathe in is full of doubt, uncertainty, false truths, and conflicting interests. We cannot hope for success as individuals, much less as a nation, without a compass, a sentinel of truth that is unmoving amidst the turmoil of perceived inter-subjectivity, and I fear as a nation we are losing sight of that beacon.  What follows are two specific examples of what I mean:

Example 1:  So I’m at a bar with my friends one Friday night. I watched a girl knock my buddy’s newly topped-off beer off a table, sending the mug to the checkered tile, shattering in all directions. The girl simply shot a curt apology and attempted to slip off into the crowd, but my buddy stopped her and politely asked her to pay for the five dollar beer she just wasted to the bar floor. 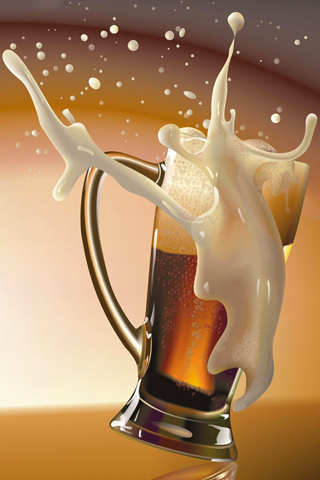 Bristling, she rebutted that she didn’t have the money to pay for his beer and furthermore didn’t feel obligated to spend her “labor” (as she worded it) on his beer, since it was so close to the edge of the table. He explained that she just cost him *his* “labor” and less politely explained that while there was no legitimate legal obligation for her to buy him a beer, that it certainly would be the right thing to do, and if she can’t afford beer, she probably shouldn’t be in a bar in the first place.

So, there was an escalating exchange. Ultimately, my buddy was compensated, but it was through one of the girl’s friends who agreed that his request was not unreasonable; the self-entitled hipster girl continued to maintain the stance that she owed him nothing, and went on to villify him for costing her friend the money for the beer.

The bottom line here is that the following is common sense: if you break or lose something that belongs to someone else, you replace it in one manner or another. In this girl’s mind, she felt completely justified and unapologetic over the matter, ultimately at the expense of her friends.

Example 2:  A few days ago, I saw a post on Facebook where one of my friends was complaining that the Benghazi scandal was “getting a little old,” with an associated meme of Jan Brady of the Brady Bunch captioned “Benghazi, Benghazi, Benghazi!!” clearly mocking the media and political officials those who continue to pursue this matter.

I find this line of thinking absolutely reprehensible. Americans died because of hesitation to pull the trigger on the quick reaction force (whether the stand-down order was actually given or not is the point of contention, but everyone agrees that at a minimum, the order to execute was delayed). Americans died, and the leadership’s response was a shrug of the shoulders, “what does it matter, Benghazi was a long time ago,” and so on, until it faded from the lay-American consumer’s bubble of relevance.

From Jay Carney’s stuttering presentation of “the facts,” blaming the uprising on a YouTube video which conflicted diametrically with indications from SIGINT and HUMINT sources, not mention the guys on the ground, to the cover up of the botched QRF, as the official reports from the appointed officials differed greatly from that of the trigger-pullers on the objective. 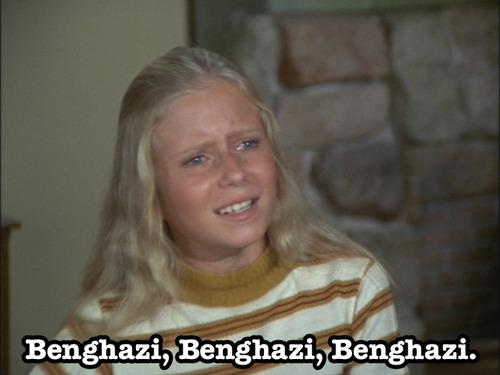 It’s worth mentioning, by the way, that the contractors on the ground all toted robust Special Operations backgrounds, a community where principles of integrity and honor are taken seriously, and personal character is paramount. Their motivations for dishonesty aren’t as compelling as the conflicting parties in this debacle. After all, their careers weren’t on the line when they were in Libya; just their lives, which they gladly threw into the fray to save their brothers.

And yet, there are US citizens who believe that pursuing justice for what seems to be a legitimate concern with regard to the integrity of our leadership is a tiresome affair, a nuisance that the GOP keeps dredging up. It’s a political issue, designed to distract us from the real issues, like football players beating their wives, “reality” television, and celebrity divorces.

Example 3:  Ask any good Infantryman (or quite literally ANY Army Ranger) what the most important principle of patrolling is and they’ll tell you it’s common sense. In the Army, we had a thing called after action reviews. This is where following the culmination of an operation or training event, the constituents involved hold a meeting and discuss the aspects of the event that went well, and the aspects that either need improvement or could have gone better.

Everyone knows this is a time for thick skins, because generally there is always something you as an individual, let alone as a team, platoon, or task force, could have executed more efficiently or effectively from premission planning  all the way through to exfil and passage back through friendly lines. In my experience, I found that the flow of these AARs depended on the leadership.

Good leadership owned their missteps and integrated the lessons learned into the next operation, so we all improved, appropriate time was set aside for planning, nuances to logistics and movement were refined, and the execution was smoother, more streamlined the next go around.

In other instances, I saw legitimate concerns (or “improves,” as we called in the Army to denote something that could have been better) dismissed by the leadership, bristling in defense of their precious plan. In all of these instances, without fail, the guy in charge of that piece of the puzzle had a very compelling explanation for why things didn’t work out as well as they should have, discussing the moving pieces that we, the subordinates, didn’t see, citing factors that limited their authority, mentioning the events that were beyond their control, etc.

In all cases, this is the kind of stuff we all know and accept as part of military planning and execution. The consistent theme here was that leaders who were resistant to criticism did not evolve at the rate that their receptive colleagues did, and as a result their operations continued to have the same problems, always rationalized as moving pieces we didn’t see, aspects out of their control, and factors that limited their command authority. In combat it doesn’t matter how compelling your argument is for *why* if it didn’t yield the intended results.

Military operations largely function from a basis of doctrine, principles written from the blood of past missteps, because without that doctrine, we would continue to revisit avoidable failures. Even with those principles in place, we still encounter challenges. There is always a time to deviate from protocol, but typically, some of the greatest operational blunders rooted from leaders lacking a respect for those principles and the counsel of their most experienced advisors, wanting to do things their own way, and oftentimes costing many lives.

All of the events I mentioned above–the spilled beer, the cynicism about Benghazi, the different reactions to AARs– all have one thing in common link: rational behavior versus rationalization.  What causes people to rationalize versus to engage in rational, critical thought and analysis?  Many of the people involved in the examples I gave would be far from what most would consider “ignorant.”  Many of them might have college degree, use grammar properly, read the news. I thought to myself “How can educated, intelligent people buy into such utter crap?”

And then it occurred to me:  it was the very reason that a person IS educated and capable of utilizing rational thought effectively, that they were viewing the matter in such a distorted light.

The objective truth (moving past the metaphysics of how, if, and why we see the world and operating off the assumption that the world exists empirically as we see it) simply exists; rational thought allows us to focus that truth and capture it, like a camera lens, and just like a camera lens, that image can be shifted out of focus. It is possible to rationalize an idea until it is distorted and blurry, but from the perspective of the thinker, they have properly captured that image.  That image doesn’t necessarily become clearer with education, money, or experience if those things are merely used to reinforce a false premise.

Now, there is a difference between people who over-rationalize on purpose and those who do so deceptively, the latter known as Sophists, but regardless of the motivations, I have observed a rise of this over-rationalization and sophistry in American media and culture, and it is taking the place of the principles that made this nation and its constituents great.

The rational mind is what separates us from all other living species on this planet, but it can also be our downfall. Sometimes it’s easy to get caught in a loop of rationalization to save your pride, to avoid the pain of admitting fallacy.  It’s a defense mechanism that prevents intellectual honesty and self-realization, and if utilized in the proper venue with the proper amount of force can be a weapon to bludgeon the masses into ignorance.

In a world that will turn away a service member from walking his daughter into her school because he is wearing a United States military uniform, a world that thinks the Global War on Terrorism is over, a world where questioning the integrity of our leaders is “getting old,” you need a system of principles, a guiding light.

Be honest with others and with yourself. Have a system, know and abide by it, and know its limitations. This is why principles exist; they are fixed, unmoving beacons of truth in a protean sea of rationalization. A great man once wrote that the highest form of liberty is the disciplined spirit, because when you are disciplined, you cannot be leveraged; you are dangerous because you are free of persuasion.

Be free, be safe. But if you can’t be safe, be dangerous.  RLTW.