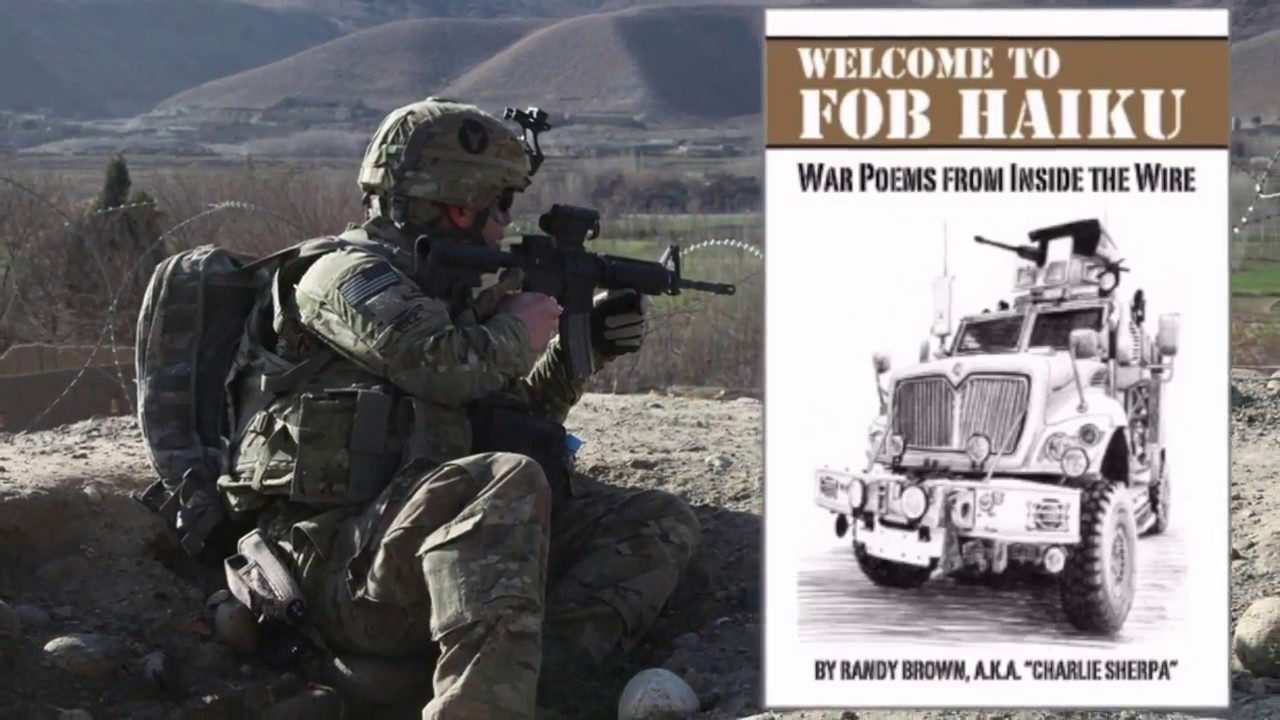 Book Review: Jonathan Baxter, author of “The Ghosts of Babylon“ 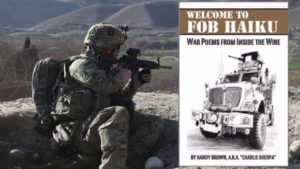 In Welcome to FOB Haiku: War Poems From Inside the Wire, author Randy Brown, “Charlie Sherpa,” presents a wry, humorous, and frequently profound reflection of the different facets of the modern military experience. In his anthology, he showcases the inherent poetry of military speech, bringing to light the prosody in the acronyms and aphorisms of the Armed Forces. Brown also utilizes an arsenal of literary devices to create verse marked by subtle, technical wordplay. In this volume, Brown presents a different side of the Afghanistan conflict that makes this book required reading for anyone trying to truly understand the nature of America’s longest war. 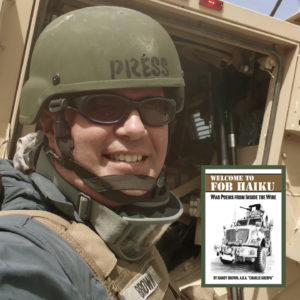 A twenty-year Army veteran, Randy Brown deployed to Afghanistan as an embedded civilian journalist with the Iowa National Guard’s 2nd Brigade Combat Team, 34th Infantry Division. His anthology begins in Basic Training, continues through his deployment as a journalist, and explores the characteristics of Forward Operating Base life in Afghanistan before returning to America and reflecting on transitions to life at home.

One of the delights of reading another war poet is the recognition of shared experience as well as the freshness of a new perspective. Iraq and Afghanistan veterans will immediately recognize his portrait of FOB-life with its “twilight hall of clockwork meals/reflective belts/and indoor plumbing.” At the same time, he gives insight into the experiences of professions that do not get their share of attention, such as embedded reporters: “’Dead-weight,’ ‘straphanger’/I carry only stories/No guns, no camo.”

Brown provides a new and important study in an often-overlooked aspect of the Global War on Terror. While the canon of war literature tends to focus on the experiences of frontline troops, Brown tells the experiences of the less-glamorous but no less crucial soldiers and civilians in non-combat arms professions, whose overseas experiences were relegated predominately to life on FOBs.

Through his witty and reflective style, he presents FOB life in all of its monotonies and ironies. In the titular “Welcome to FOB Haiku,” he writes: “All that we do here/supports the Warfighter, and/Tuesday’s Salsa Night.” In one of my favorite poems from the anthology, “Café Sessrumnir,” he reflects on an alternate Valhalla, not for the “weary warriors gone/berserk with roidal rage/and Monster drinks” but for the “Fobbits” relaxing in the cool of a FOB coffee shop.

In addition to its portrait of FOB life, this book explores other modern battlespaces. Brown takes us into Tactical Operation Centers: “the talk in the TOC is just talk/and the sergeant major wants it quiet/more church than a circus tent.” He also takes us up into the skies in “love note from a drone” wherein an anthropomorphic drone quips, “I am sorry I crashed your wedding.”

Throughout this chronicle of the deployment experience, Brown highlights the poetry that is inherent in the military vernacular. He finds poetry in the language of Army squad leaders, drill sergeants, Radio Telephone Operators, and Forward Observers. Brown turns the age-old “I’m up. He sees me. I’m down,” of infantry training into a heptasyllabic line of haiku verse. Routine radio traffic is similarly turned into a syllabic meter: “Last-calling station/I read you Lima Charlie/Welcome to my world.” He holds up Army one-liners as alliterative aphorisms (“blood makes the grass grow green!”) and finds the metaphors in all aspects of military speech (“You are all ate up/like a soup sandwich, soldier!)

In addition to showcasing the occurring poetry of military experience, Brown displays his own skill as a wordsmith. He elevates icons of military service through his original usage of metaphors, as in his sonnets to a K-pot helmet (“You are a hard green bowl to crack apart/inscrutable like Chinese egg-drop soup”) and Mine-Resistant Ambush Protected vehicles (“a Trojan cow that smells of unwash’d socks”). Even “Jody,” the timeless adulterer of military legend gets a shout-out: “A Blue Falcon flies/into your happy nest and/makes itself at home.”

Beneath the humor and the wry, pithy observations, Brown provides deep reflections on the nature of our conflicts. In “on the runways of Kabul,” he describes the NATO mission in Afghanistan in terms of a fashion runway show. “We shall educate him in the Western guise,” he writes of Westerners training Afghans, but he finishes with the observation that we are ultimately sharing “the emperor’s new clothes.” In “Hamlet in Afghanistan,” Brown writes: “But nothing we can ever do/will change that day in the village/or bring back Rosie and Guido/from the dead.”

Brown juxtaposes the timeless and the modern throughout the anthology, and, in so doing, emphasizes the enduring nature of war and conflict. In “Huginn and Muninn start a blog,” Odin’s ravens of Norse mythology, “Thought” and “Memory,” petition for “clicks” and “likes” on social media. In “Dolce et Decorum Est, Redux,” he takes the chemical gas attack of Wilfred Owen’s classic poem of WWI trench warfare and gives it an ominous, nuclear twist.

Welcome to FOB Haiku provides an original perspective into service in the modern military. Brown takes the 99% of the military experience, the boring, tedious, and mundane aspects that are so rarely chronicled, and elevates them through subtle, skillful literary devices. Poetry enthusiasts will appreciate his wordplay, metaphor use, and uncanny ear for the occurring poetry of the military vernacular. Veterans will recognize their experiences overseas and appreciate this new take on the deployment lifestyle. Anyone seeking fresh insights into military service during our current conflicts will appreciate this outstanding anthology.

Welcome to FOB Haiku: War Poems From Inside the Wire (Middle West Press LLC, 2015) by Randy Brown AKA “Charlie Sherpa” is available on Amazon in paperback and ebook.

“Jonathan Baxter” is a former Army Ranger, current private security contractor, and covert author. His first volume of poetry, The Ghosts of Babylon, was published in 2016 by Blackside Publishing.