HomeCultureBook Review: Warrior: How to Support Those Who Protect Us, by Shauna Springer, PhD 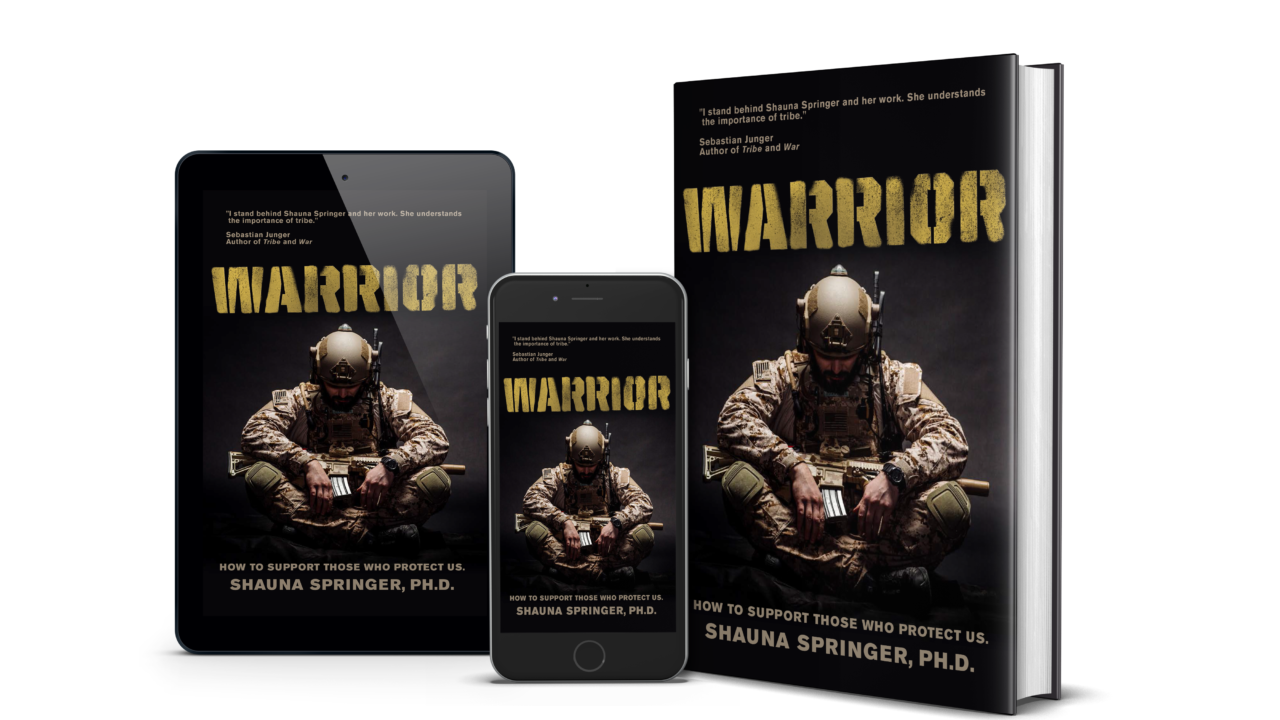 It’s hot. The exothermic nature of corn means that while it is 123 degrees Fahrenheit on the dirt road to our left, its pushing 130 degrees here in the corn as my Marines and I move to isolate an intersection in the Helmand Provence of Afghanistan wearing 95lbs of the lightest s*&t ever made. At this point there is very little communicated over the radio, single phrases or short bursts of static when the hand set is “keyed” communicates that, while I cannot see them, my Marines are there on my flanks and oriented on the enemy. Hours of training and shared experience have developed an unshakable level of trust in one another. That anywhere, even Afghanistan, we are not on our own because the tribe is with us. In her book Warrior: How to Support Those Who Protect Us, Doctor of Psychology Shauna Springer argues that this kind of trust is fundamental to not only combat operations but also a provider’s ability to successfully come alongside struggling veterans and first responders; fundamental and absent. This sort of intimate trust is the key to changing the way we combat veteran suicide.  Her thesis paraphrased is plucked from Marine Corps doctrine: “An isolated unit [Marine] is easily destroyed by the enemy.”

Warrior brings to light the institutional misalignment between providers and warriors, the true value of trust and soldierly virtue, and the primary adversary leading first responders and military members to consider, or be killed by suicide; shame. What Lieutenant Colonel (ret) Grossman’s On Combat did for the military professional’s understanding of the application of violence in the moment, Dr. Springer’s Warrior does for Marines during “the long periods of tranquility at home”. Warrior is a must read for any military leader (that means you). It provides measurable effects with-in a poorly aligned military suicide prevention program, maintains a premium on mission accomplishment and the warrior ethos. As more leaders discover the value of this book I expect it to quickly be added to the service’s required reading lists.

On the first page of her introduction, Dr. Springer deftly utilizes the analogy of the Spartan boy who stole a Fox and then concealed it in his cloak during his day of classes. During class the fox begin to nip at the boy’s midsection. The boy sat without moving or crying out, in fact so stoic was the boy that at the end of class he slumped from his chair, dead. The Fox had devoured his insides and the boy never uttered a word. Warrior compellingly argues that the common thread with suicide attempts and those killed by suicide in our community is a more subtle and persistent threat then something they experienced “over there” and is often shame derived from some moral injury that may or may not be related to a combat deployment. The author posits through research and hundreds of clinical hours that shame first appears as guilt, an emotion that arguably has a healthy purpose to que us to a violation of some cultural mores. This uncommunicated guilt can metastasize to shame and begins to sustain itself inside a struggling service member or first responder. Dr. Springer aptly likens the damage shame can do to a machine gun and communicates Shame’s supporting structure with the acronym SAW (Shame, Avoidance and Withdrawal). Warrior goes to great length to call forward the timeless nature of those who serve in the capacity of Protector, leaving the military reader with a sense of finally being seen for what we are, no more and no less.

Warrior spends ten chapters translating the value of trust, tribe and identity to her fellow psychologists and likewise communicating the value of mental health to the military community in the common tongue of our culture. This cultural understanding is generated authentically, demonstrated throughout the work, moves well beyond cultural competency and is readily apparent from the beginning.  In Chapter One: “A Little Secret About Secrets”, Dr. Springer expertly distills the value trust holds in our culture; the struggle in earning it and the devastation in squandering it. Her ability to identify the “trust gap” in her words, as well as the more easily seen culture gap begin a chapter that goes on to illuminate the critical difference between a Doctor of Medicine and a “Doc” and urges her peers in the field to value being the latter in order to be better at the former. In effect, communicating what most Marines know intuitively, one can have a sound grasp of doctrine and operational effects, but without sound fieldcraft and tactical application one is left with a lot of knowledge and no wisdom. By the end of the chapter “Doc” Springer has the military reader excited about finishing a book finally written by someone who gets it.  By the time one has finished chapter four, her dissertation on the significance of firearms in our service and the effects of well-meant but poorly executed efforts to take them away from struggling military members, it is clear she has seen behind the curtain and into the tribe. Having established her bona fides at this point, Warrior goes on to urge providers and military members to consider how they/we perceive strength, one another, responsibility, and guilt.

Warrior concludes each chapter with questions the reader is asked to consider. Some are for the benefit of civilian providers and others are geared toward us, regardless there is value in considering all of them. I don’t know what I was expecting to read in these end-of-chapter sections; maybe ephemeral questions about the feelings of others or how Jung may categorize a specific case, either way as I prepared to quickly scan through them, I was struck by their value. While they certainly aim toward introspection and an understanding of the “other”, they also force the reader to consider a deeper understanding of their culture. In my case, what does it fundamentally mean to be a United States Marine? I found these questions developed a deeper cultural intimacy and pride in a tribe I have been a member of for 20+ years. These questions, captured at the end of every chapter, also lend themselves quite easily to hip pocket classes or other forms of unit PME (Professional Military Education).

In the closing chapter of her book “A Different Kind of War” Dr. Springer deftly applies the doctrinal underpinnings found in Marine Rifle Squad to, in her words, “develop a tactical analysis of mental warfare.” In doing so, Warrior logically lays out how our identity as tireless protectors, professionals, and members of a tribe that holds faith with one another as sacrosanct is twisted and used against us by the fallacy that shame creates. So powerful is this idea and its application that if one were to only read a portion of this book, read Chapter five “Shame on You” and Chapter 10. Reading the final chapter was like spending hours in the MCMAP (Marine Corps Martial Arts Program) pit or on the Jujitsu mat committing an attack to memory. “The strength of the warrior is the team” yes! “My weapon is a manifestation of my decision to die to self in order to preserve the many” yes! Only to have the professor deconstruct my attack quickly and force the tap-out with a counter that uses my flawless technique against me. Chapter ten is a punch in the gut because the author has up to this point, deftly and correctly identified what is important to our culture and confirmed it as right and just. The final chapter shows the reader our surfaces and gaps, how believing the lie of shame compromises the structure that we have built our individual and institutional identity on, using our own warrior ethos against us. As the chapter and book close, Warrior provides a campaign plan for maintaining the positional advantage in our lives. This plan is equipped with tactics, techniques and procedures developed in concert with the author and Marines and soldiers on the winning end of post traumatic growth. These tools lend themselves so easily to application at the Battalion level and below that we continue to do our subordinates a disservice by not at least reviewing them for consideration. Doc Springer and the Soldiers, Sailors and Marines she works with have provided a road map to revolutionizing how our services view and address suicide. Methods firmly rooted in trust and not clichés, that confirm and develop a warfighter’s readiness, sense of self and their position in the tribe.

Warrior: How to Support Those Who Protect Us sees you, it doesn’t “thank you for your service”, celebrate the victim, attempt to condescend, or presume your hopelessness as a broken member of an outcast tribe. Warrior celebrates the strength of the team and the resolve of the community and urges leaders to develop the mental hard feet and strong back of a profession of arms that recognizes the value of coming alongside one another. I consider this book a force multiplier and if given the opportunity to command again, required reading for those that work with and for me in the future.