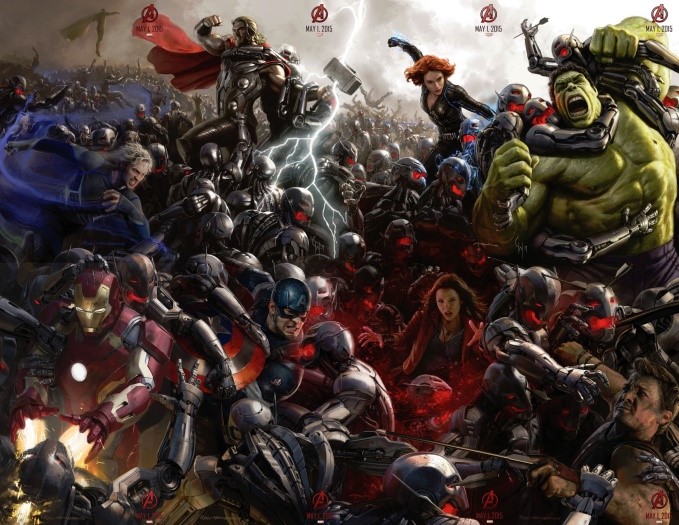 “I’m glad you asked that, because I wanted to take this time to explain my evil plan…” – Ultron

Let’s get this out of the way up front.  If you’re a Marvel Universe fan there is nothing which I can say that will dissuade you from seeing Avengers:  Age of Ultron.  As one fan to another I would say that you should see it because as we all know, the Marvel movies build on each other and there are definite implications for the future films in this one.  But given that I am writing a review on the movie that I actually saw, I will be brutally honest and say this is the first Marvel movie which I have been disappointed.

The deck is always going to be stacked against the Avengers as a film concept.  It is an ensemble movie which is equally blessed and cursed by the rich tapestry which is woven by the other more focused Marvel stories.

Each of the other Marvel movies has a particular hook which makes them enjoyable in their own right.  The Ironman movies put the lovable rogue, Tony Stark, center stage and let him wisecrack and chew scenery.  Thor has been blessed with two of the best directors in the franchise as well as the most interesting and popular bad guy in Loki.  Captain America probably has the most compelling story with the second entry, Winter Soldier, being arguably the best and most dark entry in the Marvel franchise.

The Avengers have to bring all of it together along with the burgeoning cast of side characters.  In my opinion, it worked in the first Avengers because they wisely brought in Loki as the foil and wisely tied the movie to the lore introduced in the other movies with the Infinity Stones, Thanos, and the Chitauri coming together in a wonder culminating event which resonated throughout all of the films and TV series – even the most recent Daredevil series on Netflix ties in the events from the first Avengers film.

The Avengers: Age of Ultron strays away from the Avengers and the subsequent films and gives us one of the flimsiest villains in the entire series.  There was an interesting road they could have taken with Ultron being a reflection of Tony Stark’s narcissism and fears – but it is only briefly touched on before we cut to yet another fight scene.  The richness of the characters is given short shrift and a number of oddities crop up, like the Black Widow/Bruce Banner romance which given the direction taken in Winter Soldier, strikes me as insipid and unearned.  And then there are the constant fight scenes.  I know it is a superhero movie and there are going to be lots of them but since I wasn’t interested in the bad guy and there was no real dramatic tension, I felt strangely hollow from all of the fights.  They weren’t even technically interesting given some of the superior fight scenes in past Marvel movies.

Interestingly, my biggest complaint of the film is the overuse of humor.  I love wisecracking heroes and a good line traded in the middle of a fight – but in A2, hardly a second goes by without a joke of some kind.  The pace of them is so frenetic that the movie risks devolving into a self-referential parody.

Guardians of the Galaxy showed how humor should be used in an Marvel ensemble cast – take an oddball group of misfits and put them in serious situations which they take seriously and then step back, the humor will come from their actions and reactions.  In A2, the characters were way to self-aware and mugging for the camera with lines that frequently felt forced and out of place.  It took me out of the movie.

That is a shame because there is a brilliant scene in the middle of the movie.  They introduced a new character played by Paul Bettany who almost stole the movie with his performance.  The action stopped and the dialogue and interaction between the new character and the Avengers was awesome.  I felt like it was a scene from a better movie.  Instead of more moments like this, we get the Avengers playing drinking games with Thor’s hammer.

If you’re loyal to the series, I recommend seeing this film but I cannot in good conscience call it a good movie – it is the first misfire in the franchise.   The Marvel movies are immensely popular and are the cinematic equivalent of comfort food but we are now at peak superhero in the cultural zeitgeist and this kind of effort isn’t going to cut it anymore.

Not all superhero movies can be as complex and layered as Watchmen or Unbreakable but the gauntlet has been thrown and you should at least try to be good as The Dark Knight or Winter Soldier.  Anything less from here on out is going to be a disappointment.

Author’s Note:  There is only one post credits sequence – you do not have to stay to the end of the credits, it pops up about 30 seconds into the credits.   It is short and my only reaction I care to share is, ‘It is about time’.