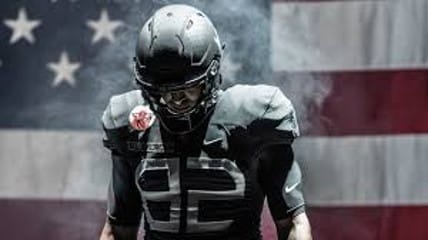 In a tightly-contested and emotion-filled meeting at West Point’s Michie Stadium, Army Football defeated rival Air Force 17-14 today to improve to 7-2.  With this win, Army clenches the right to retain the Commander in Chief trophy, which is awarded to the top service academy football program, and which Army wrenched away from Air Force last year.

This year’s win is a repeat performance against Air Force, which went down in flames 21-0 to Army in last year’s contest.  Nationally-ranked and bowl-eligible Army went into the game heavily favored and while Air Force played a much better game than predicted, they still couldn’t eke out the win.  Some end-of-game scuffling, perhaps a result of frustration with a couple of highly questionable referee calls during the game, was an unfortunate footnote.

An interested aspect of Army Football is that it almost doesn’t matter what the team’s win/loss record is, or whether they retain the Commander’s Trophy.  The big thing is… Beat Navy.  Fortunately, Army has won the last two contests, and also defeated Hawaii now Air Force, both of whom won rather convincingly against against Navy.   Army is on a five-game win streak, with their latest lost being against football powerhouse Oklahoma.  While anything can happen in The Game, things are looking good for Army.