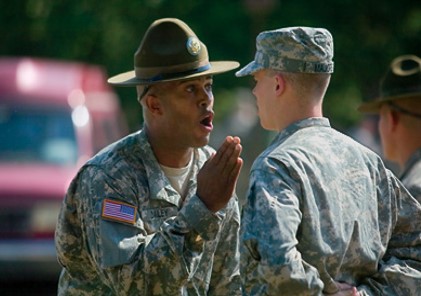 Measured against today’s politically correct standards for training raw recruits, I must have been abused to the point of permanent psychologically scarring during basic training.

Only, that’s not how I remember it.

The definition of the word abuse seems now to be generationally interpreted. In my generation, it meant ‘treat with cruelty or violence.’ Today it appears to mean disturbing another’s chi. In fairness to today’s recruits, their feeling in boot camp is the same as mine was. The loss of personal freedoms, learning to respect authority, and being a part of a team can be disorientating concepts to many.

I’m not saying that the training of raw recruits then or now is better or worse. I am saying that the judicious application of power to totally control and mold a human being into an effective contributor to an organization is appropriate and far from abusive or cruel. We’ve all seen folks, both draftee and enlistee, we were positive would never survive boot camp go on to stellar careers at the highest levels of the military because someone else was responsible for developing the drive the recruit wasn’t even aware they possessed.

Yelling at someone who commits an error that could result in injury to themselves or others is neither cruel nor violent. Having a foot unceremoniously planted in your butt when falling behind on the morning run was actually a motivational gesture. You might feel you’re going to die on the run, but you won’t fall behind again. The foot was embarrassing, not painful, cruel, or abusive. Does anybody remember that handprint on their butt from the first jump at Benning? It wasn’t abuse. It gave you something else to think about besides freezing in the door.

In the final days of boot camp, we had earned a post pass. We could only go to the PX, post theatre, or beer garden. After falling in formation wearing highly decorated Class ‘A’s (name tags and US brass) we filed up by squad to sign for our passes. During this process, the platoon sergeant asked if anyone had a pencil. I did and ran it up to him, then returned to formation. When he had finished calling out the names to collect their passes and was folding his little OD green wooden table, I was still at attention.

As he began to walk away I said excuse me, SSgt Johnson. I signed for a pass. He looked in the sign-out book and responded “No you didn’t boy. Look.” I looked, and my name had been erased, possibly, with my own pencil.  Cruel? It took me years to admit it was my mistake, but I got it. To this day I only use pencil on electronically scanned forms and crossword puzzles.

I’m a product of the Greatest Generation. My dad, uncles, and neighbors had all served. We were raised on the stories of that era and had no illusions about what to expect in boot camp. We were all prepared to be treated as one rank below, and certainly less revered than the general’s dog. But some fifty years later not a day goes by that I don’t call on and use those lessons imprinted on me in boot camp: Help those who need it but don’t facilitate weakness. Be part of something greater than myself. This life is not all about me. Spend any available time you have improving your position.

To all my “abusers”: you earned my respect and have my heartfelt thanks for making me the person I am today.