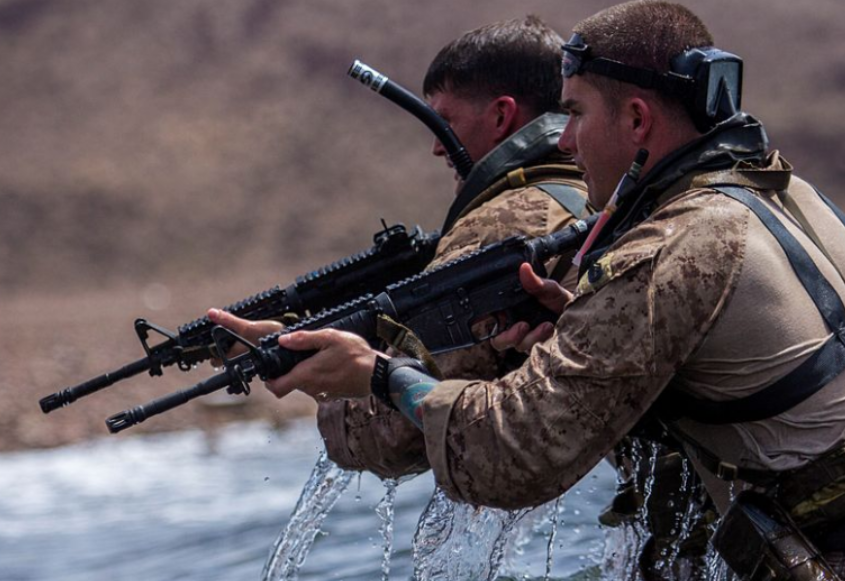 Mission Accomplishment comes before everything and everyone. We are a Marine Corps at war and our nation requires sacrifice on our part to protect our freedoms and liberties. This may mean long hours of monotonous work in austere conditions, or it may mean that we pay for these liberties with blood. Casualties are an unavoidable byproduct of war. Take care of your wounded, insert a new magazine, and seize your objective. Doing anything less is a disservice to the men you’ve lost. This is a rough business. We must carry on no matter what the conditions – never forget that the mission comes first.

Let no man call you a coward and let no man shoulder your burden. Victory often requires great sacrifice. Often times the sacrifice required may be your own. In times of great chaos, someone has to remain sane and do whatever it takes to push everyone in the right direction.

When something goes wrong and you are pinned down with no communications, guess who needs to stand up, brave the grazing fire, and make something happen? Suck it up, buttercup! This is why you get all that extra pay right? When all else fails, click your weapon off safe and make something happen. Trust a Senior NCO or Officer with a Purple Heart; he is probably doing it right.

Never put yourself before your Marines. The mission comes above all else, but the men come right after. Oftentimes leaders spend too much time worrying about the many tasks and demands they constantly receive from higher headquarters. Battles are not won through PowerPoints and paperwork; they are won by young Marines who perform violent acts on our behalf. Focus on your Marines and worry about the paperwork later. If you see a line for something good, get in the back. If you see a line for something bad, get in the front.

Every day is a selection, and every task is a test. Prove yourself daily to your superiors and subordinates alike, but you are the only person who really knows if you have given everything you can to the mission. Make sure you give one hundred percent of yourself when you’re at the range, under the bar, or on the track so you won’t come short when you’re on the battlefield.

A decision made out of fear for yourself or your career is always the wrong decision to make. We ask our Marines to risk their lives on a daily basis. If you don’t have the backbone or the stones to risk your career to do the right thing for your Marines, then you don’t deserve to lead them. Always do the right thing, no matter what the consequences.

Making any decision is always better than making no decision. Indecision is a form of cowardice. Some of the decisions you make will cost your Marines their lives. Don’t worry; you will have plenty of time to agonize over that when you are wearing a red patch-covered jacket at the VFW someday. You don’t have time to waste thinking about it now. Take a second to analyze your decision, figure out how you can make a better decision in the future, and FIDO (F— It, Drive On).

Every day is a training day. You train yourself to behave in a certain fashion every day. If you are lazy and undisciplined in garrison, don’t expect to be any different in combat. Very few of us will rise to the occasion under fire; the majority of us will fall back to our highest level of training. Don’t develop training scars that will haunt you in combat.

It’s okay to make mistakes, just not the same one twice. It is far better for a Marine to make a mistake in training and learn from it than to wait until he deploys and makes the same mistake in combat. Make your training as realistic as possible to iron out any friction points.

Strive to master the basics and you will be successful. The mechanics of war are deceptively simple. It’s the employment of these concepts that is extremely challenging. Don’t be enamored with over-complicated plans and strategies. Most tactical problems can be solved with an equal dose of aggression and violence. Units that focus on the basics and apply the fundamentals they have been taught will always be successful. An infantry squad that successfully integrates mortars and Close Air Support into their maneuver is nearly undefeatable.

Strong NCOs make for a strong organization. Any organization with strong senior leadership and weak NCOs will fail. A good leader will focus his efforts on building his NCO corps and empowering his subordinates. Marines need to be trained to be leaders and decision-makers. This means they will make mistakes. Don’t hold your Marines to a zero-defect standard or else you will have an organization full of gun-shy automatons.

Marines are looking for a leader, not a well-paid friend. When Marines start dying in the streets, your men will look for leaders and not friends. A good leader is ready and willing to take the moral burden of a difficult decision away from his subordinates. There may come a time when someone will have to make a decision that will result in the death of another Marine. That’s the time for you to start giving orders and spare a subordinate the pain of an impossible decision.

The difference between victory and defeat often comes down to willpower and endurance. Everyone knows you need to conduct maintenance on your weapon, vehicle, and equipment, but some Marines fail to maintain their bodies in a state of combat readiness. Wars are won by men; not by machines and tools. If your body is not up to the task, your equipment will not make up the difference.

The perception of an act may sometimes overshadow its intention. It is important to understand how your appearance or actions are being perceived to avoid any perception issues. An unshaved or unkempt Marine can quickly ruin the reputation of a unit. Perception is easily confused with reality.

Live a selfless life and serve a cause greater than yourself.