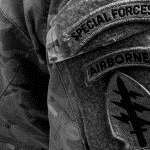 Loren started his career in the infantry and as soon as he was eligible attended Special Forces Assessment and Selection. He spent the next 16 plus years serving in the various positions within the Special Forces Regiment. He served in the 25th ID, 10th SFG (A), 3rd SFG (A) and retired as an instructor in the Special Forces Advanced Mountain Operations School. He served on a Mountain Team, Mobility Team, and in a Special Forces Direct Action Company. He deployed twice to Kosovo, the first time in 1999, eight days after the air war ended, and was there for his second trip during 9/11. From April of 2002 to May of 2009 he deployed five times to Afghanistan and twice to Iraq. Loren started his Special Forces career as an 18E and in 2008 graduated the SF Intel Sgt’s Course and became an 18F. He is a graduate of SFARTAETC, SF Mountain School, Jumpmaster, and multiple civilian mountaineering-related schools.