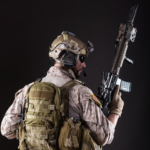 In 2008 my Force Reconnaissance Platoon conducted a deliberate clear of a city called Shewan in the Farah Province of Afghanistan.  The city of Shewan was a Taliban safe haven used to plan and stage attacks on Coalition Forces and was home to several of the major insurgent leaders who commanded approximately 250 full time fighters. My platoon was tasked with supporting a … END_OF_DOCUMENT_TOKEN_TO_BE_REPLACED