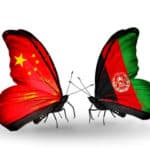 China Says It Has "No Plans to Deploy Troops to Afghanistan," But... Yrene Saint According to statements quoted in The Washington Post, no one needs to worry about China's troops deployments in Afghanistan because, wait for it, "there aren't any." Spokesman Colonel Wu Qian of the Chinese Defense Ministry says that reports that hundreds of People’s Liberation Army … END_OF_DOCUMENT_TOKEN_TO_BE_REPLACED