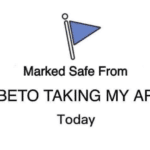 I Guess "Beto" O'Rourke Won't Be Taking My Guns After All by Scott Faith It's official: Robert Francis "Beto" O'Rourke's presidential bid has ended in the same place as his failed senate run: in failure. According to the New York Times, O'Rourke officially ended after his candidacy for president "failed to generate significant support." There's a longer explanation by … END_OF_DOCUMENT_TOKEN_TO_BE_REPLACED