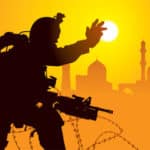 US Troops To Stay In Iraq For... "As Long As Needed?" by Scott Faith Our most recent war in Iraq started in 2003 and 14 years later, "victory" remains elusive. Like most soldiers of a certain age, I served in combat in Iraq.  Like many of us, I served there multiple times.  But unlike some of my peers, I don't resent getting sent to Iraq.  As a nation we acted on the … END_OF_DOCUMENT_TOKEN_TO_BE_REPLACED