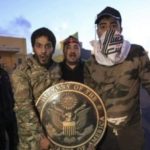 Benghazi 2.0? US Embassy in Iraq Under Attack by Scott Faith The US Embassy in Iraq, a sprawling, $750 million facility housing 5,500 Americans in downtown Baghdad, is under attack. Parts of the compound are in flames, armed and angry locals are roaming the grounds at will, and U.S. personnel have retreated to internally-secure locations. The situation has many Americans … END_OF_DOCUMENT_TOKEN_TO_BE_REPLACED