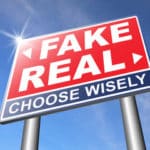 Top 5 Tips to Spot Fake News by Scott Faith Before the internet, people always believed in what the news tells them whether on television, radio or newspaper. Now, as more people have access to the internet, a lot of people have claimed that the media we know for a very long time could be fake news. Fake news is considered as a compilation of reports that are either untrue … END_OF_DOCUMENT_TOKEN_TO_BE_REPLACED