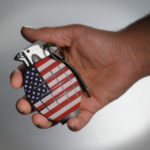 Why We Don't (Shouldn't*) Negotiate with Terrorists by Marty Skovlund This first appeared in The Havok Journal June 3, 2014. The majority of the talk surrounding the release of Sergeant Bowe Berghdal has been in relation to his actions leading up to his eventual living arrangement with Haqqani network terrorists. I think it is safe to say at this point that Sergeant … END_OF_DOCUMENT_TOKEN_TO_BE_REPLACED