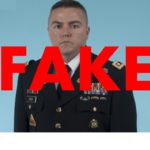 Why is Gerald H. Green III still permitted to wear the uniform and draw the paycheck of a lieutenant colonel in the US Army? You might recall that LTC Green made headlines back in 2014 when allegations arose about the validity of several awards he claimed to have earned, many of which are visible in his official Army photograph (right). Over the course of an … END_OF_DOCUMENT_TOKEN_TO_BE_REPLACED