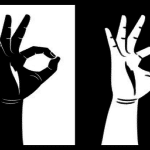 You looked! Now Look Again: Why the Army/Navy "Circle Game" Controversy Matters by Paul James No high-profile event in America is complete without an unexpected controversy and this year’s Army-Navy game was no different. During the live broadcast of the annual rivalry game between West Point and the Naval Academy, a handful of cadets, both Army and Navy, appeared on … END_OF_DOCUMENT_TOKEN_TO_BE_REPLACED