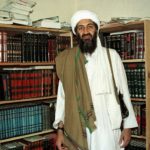 The Top Five Weird Books On Osama Bin Laden's Bookshelf by Chris Otero “Tonight, I can report to the American people and to the world that the United States has conducted an operation that killed Osama bin Laden, the leader of al-Qaeda.….” – President Barack Obama On 1 May 2011, the President of the United States announced the death of terrorist mastermind Osama bin … END_OF_DOCUMENT_TOKEN_TO_BE_REPLACED