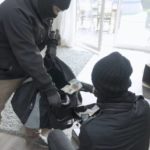 “A coward dies a thousand times before his death, but the valiant taste of death but once”. William Shakespeare   I’ve had a lot of interesting jobs in the tactical world. The common denominators for these gigs were the fact that they were hard, dangerous and the pay sucked. So, when a guy offered me $30 an hour to babysit some rich dude who wanted a hired gun in … END_OF_DOCUMENT_TOKEN_TO_BE_REPLACED