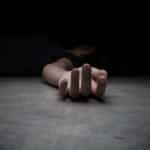 He Murdered His Whole Family, Then Stuffed His Girls' Bodies Into Oil Tanks by Scott Faith A man who publicly pleaded for help locating his missing family is now charged with their brutal murders. Colorado resident Christopher Watts, who is now accused of murdering his pregnant wife and their two children, claims he "went into a rage" after witnessing his wife kill the … END_OF_DOCUMENT_TOKEN_TO_BE_REPLACED