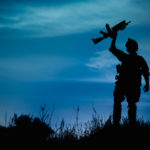 Vetrepreneurs, It’s Time to “Ranger Up!” Pt. 2: Making It... Or Not by Michael Kane Editor’s Note: In this series of articles from 2016, HJ writer Michael Kane interviews Ranger Up CEO Nick Palmisciano, who is considered by many to be “the Godfather” of modern veteran entrepreneurship. Nick was listed by We Are The Mighty alongside other high-profile veterans like General … END_OF_DOCUMENT_TOKEN_TO_BE_REPLACED