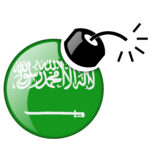 Importing the Muslim Brotherhood: Creation of the “Sahwa” in Saudi Arabia by Mike Kelvington A movement known as the Islamic Awakening (al-Sahwa al-Islamiyya) or Sahwa quickly established itself as a counter-culture to the religious establishment in Saudi Arabia over the course of only a few decades, starting in the mid-1950s.[1]  During this time, the Muslim Brotherhood … END_OF_DOCUMENT_TOKEN_TO_BE_REPLACED