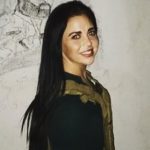 Journalist Hollie McKay Profile by David Bruce 2018 was the deadliest year on record for journalists, according to Reporters Without Borders. At a time when press patches are used as targets rather than a sign of neutrality, Australian/American Global Conflict Journalist Hollie McKay uses research, instinct, and trusted fixers to capture the story in some of the world’s … END_OF_DOCUMENT_TOKEN_TO_BE_REPLACED