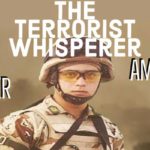 Veterans In Portland:  Watch "The Terrorist Whisperer" ...For Free by Scott Faith Hamody Jasim was an Iraqi who worked with American forces in Iraq.  In fact, he was so good that they called him "The Terrorist Whisperer." All seven of my combat deployments were with Special Operations units, and three of them were in Iraq.  So although I don't know Jasim, I know … END_OF_DOCUMENT_TOKEN_TO_BE_REPLACED