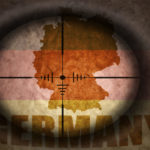 An Afgan man with an axe attacks a family on a train near Wurzburg.  An Iranian-German teenager with a gun shoots a group of children, and then himself, in Munich.  A suicide bomber blows himself up at a wine festival in Ansbach.  A Syrian immigrant using a machete murders a Polish woman in Reutlingen. And that's just in the past ten days.  What is going on in … END_OF_DOCUMENT_TOKEN_TO_BE_REPLACED