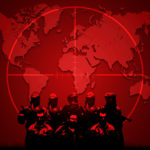 Global War on Terror and Future U.S. Policy by Francisco R. Fonseca Ever since the United States entered the Global War on Terror (GWOT) in the wake of the September 11th attacks, it has taken an aggressive stance, seeking to locate and root out terrorists wherever they may be. This was true in the immediate aftermath that resulted in the US invasion of Afghanistan and it … END_OF_DOCUMENT_TOKEN_TO_BE_REPLACED