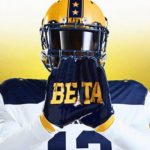 Editor's Note:  This article about the Naval Academy backing out of the the annual boxing classic against West Point was written last year, but apparently Navy has backed out again.  Maybe they, like their football team, can blame it on their uniform shoes.  #Beta _____ The United States Military Academy at West Point vs. The United States Naval Academy at Annapolis... it's a … END_OF_DOCUMENT_TOKEN_TO_BE_REPLACED