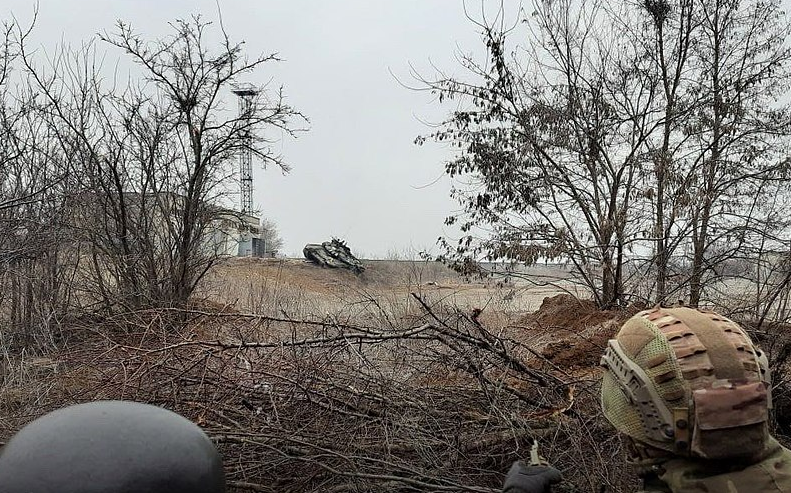 Statue of Lenin in front of the building of the Transnistria government. Photo: Katarzyna Rybarczyk

by a Former Special Forces Officer

“An army may be likened to water, for just as flowing water avoids heights and hastens to lowlands, so an army avoids strength and strikes weakness.”

Hopes of achieving a blitzkrieg-like victory over Ukraine have ended and the conflict has settled into a stalemate of sorts, where neither side possesses the strength to achieve a decisive victory.  As negotiations to a potential end to the conflict unfold, one factor remains assured, as the West continues to support Ukraine in its fight, bolstering its capabilities, Russian forces will face an even more determined and lethal Ukrainian military.

Having lost the strategic initiative and looking to carve out a modicum of success in an otherwise dismal performance by his military, Putin may follow Sun Tzu’s prescript and eye another target, one in which he can declare victory and recuperate from his miscalculation.

Currently, Russian forces control a slim arc of territory that stretches roughly from the southern Belarus border to the city of Mykolaiv in the south of Ukraine. There are indications that Russian forces have ceased offensive operations in most areas and are consolidating their gains, announcing that they are concentrating efforts in the Donbas to “strengthen” those newly “independent” territories.

Ukrainian forces have responded to the stalled Russian assault and achieved some offensive success of their own, counterattacking, and relieving pressure on key cities like Makariv, Kharkiv, and the capital Kyiv. As a result, Russian strategic aims may be shifting, from dominating Ukraine militarily to encircling it, creating a new “Iron curtain” separating Russia through a buffer zone that extends from Belarus, a Russian ally, to the Dniester River, south of Odesa.

Current negotiation and the tactical pause of military activity around Kyiv and Chernihiv may be described as a good faith effort to “increase mutual trust and create conditions for further negotiations” as Russian Deputy Defense Minister Alexander Fomin stated in recent negotiations, but more likely they are a delaying tactic, providing time for Russia to regroup, reassess and refocus their overall campaign strategy.

Establishing a buffer zone that encircles two-thirds of Ukraine offers Putin an “exit ramp” from the debacle of his current situation.  This new “Iron curtain” potentially keeps Ukraine contained through an occupied zone that maintains Russian forces engaged permanently on the border. By design, this keeps Ukraine in a perpetual state of strategic vulnerability and under direct pressure from Moscow. Most importantly for Putin, it allows him to “declare victory” in his special military operation and offers a face-saving option from which he can reassess his overall strategy vis-a-vis the West.

However, Putin’s new “Iron Curtain” is not yet complete, as a sliver of territory from Mykolaiv to Odesa remains firmly in Ukrainian control…for now. As the capture of Kyiv was at the outset of the conflict vital to the Russian war plan, this area to the south may become the new decisive terrain for Russia in the ultimate outcome of the war.

The key to the territorial encirclement of all but the western part of Ukraine rests with another “independent” territory, one that currently has Russian forces within its borders, the quasi-state of “Transnistria.”

Prior to the conflict in Ukraine, few had heard of Transnistria.  Transnistria, officially the Pridnestrovian Moldavian Republic (PMR), is an unrecognized breakaway state located in the narrow strip of land between the river Dniester and the Moldovan–Ukrainian border that is internationally recognized as part of Moldova.

Two decades before Russian-speaking separatists carved a chunk out of Ukraine, they did the same thing in Moldova.  In 1992, Moscow-backed separatists took control of a thin 250-mile sliver of land, known as Transnistria, that runs along much of the eastern bank of the Dniester River as well as parts of the western bank.

Transnistria has never been recognized internationally, not even by the Russians. Prior to the conflict in Ukraine, Russia kept approximately 1,500 soldiers present in Transnistria, nominally to keep the peace and to guard a Soviet-era munitions depot.  Since then, the Operational Group of Russian Forces (OGRF) as they are known may have increased in size.  In early February 2022, Russian forces in Transnistria conducted a series of maneuvers to test their combat readiness prior to the invasion of Ukraine. These forces may prove vital to the next phase of Russia’s operations.

As Russia regroups and offers false hope of a negotiated end to the conflict, Russian forces in the north and east are likely to continue consolidating and reenforcing their meager territorial gains, allowing other forces to shift toward other operational areas. The declaration that Russia is “reinforcing the newly independent territories” in the Donbas may be the operational pretext to shift additional forces east and south toward Odesa.

A combined ground assault from Russian OGRF forces in Transnistria along to the north bank of the Dniester River, along with an amphibious landing south of Odesa, would threaten the city and seal off the southern portion of the buffer zone. Currently, Russia maintains landing ships and forces in the Black Sea that could conduct such an amphibious assault.  Russia could then concentrate its forces in a push to link Mykolaiv to Odesa completing the ring and effectively cutting Ukraine off from the Black Sea.  Even if the Russians are unsuccessful in initially capturing these key cities, encircling, and cutting them off from Ukraine may serve as useful bargaining chips in the future as it seeks to negotiate and define the parameters of its new buffer zone.

If Russian forces advance along the Moldovan border, some fear that Russia could either recognize Transnistria, much as it did with Ukraine’s self-declared separatist republics, giving Moscow a similar pretext to officially occupy it or perhaps even later absorb it into its newly created Russian buffer zone.

The war in Ukraine has clearly shattered assumptions about the post-Cold War world, providing clear-cut evidence that Putin sees Europe’s borders as open to being redrawn by force. To think Putin will relinquish any of his hard-earned territorial gains in Ukraine appears highly unlikely. Unfortunately, the more likely outcome will be, as Winston Churchill so famously described, is that “an iron curtain has descended across the continent” once again. If this scenario comes to fruition, that curtain will effectively extend from Poland to Romania and will cast a permanent shadow upon Ukraine and the West.