HomeCultureSorry Folks, Having Marines On Those Two Navy Boats Wouldn’t Have Changed A Damn Thing 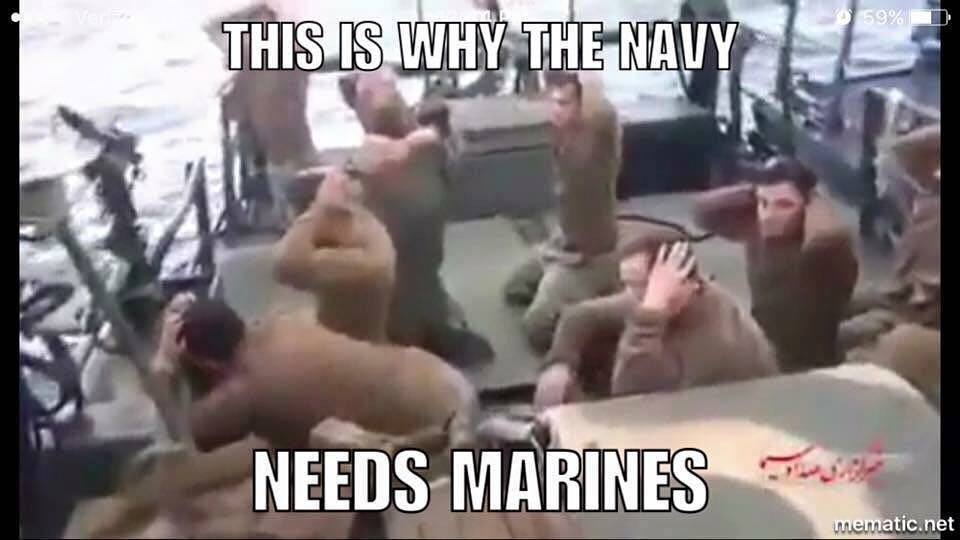 The Navy has been taking a lot of heat in the last few months related to the temporary detention of two of their boats and crews by Iranians in the Persian Gulf.  In the aftermath of this unfortunate event the Navy’s proud motto, “Don’t Give Up The Ship” has frequently been hurled back in their faces, often through social media memes.  One of the most interesting to me was one that read, “THIS IS WHY THE NAVY NEEDS MARINES,” over a photo of the detained Navy sailors on their knees with their hands behind their heads.

I’m sorry folks, but having Marines on those two boats would not have changed a damn thing, and we should stop acting like it would.

What makes me so sure?  Marine Corps history, for one thing; history both recent and distant.  I’ll start with distant history first. The Marine Corps takes well-earned pride in the disciplined nature of their fighting men and women.  From the Continental Marines to the Chosin Reservoir  to Kandahar, the discipline of the Marine Corps is the stuff of legends.

So unless those Marines would have somehow made sure that the two boats didn’t drift wildly off-course in the first place, their presence would have changed… nothing.  Even in today’s times, Marines still follow Rules of Engagement (ROE), right?  They still follow the orders of their superior officers, yes?  If so, then any Marines on those two boats would have been doing the same things the Navy sailors were:  grabbing air, cooperating with the Iranians, and not causing an international incident.  Maybe, just maybe, they would have looked a little more pissed off than the sailors.  And hopefully, unlike one unfortunate sailor, none of the Marines would have been wearing white socks.

As a more recent and more relevant example, a group of Marines evacuating Yemen were forced to leave their weapons behind before boarding outbound commercial jet liners.  Initial reports that they were forced to hand over their weapons to local Houthi militiamen were vehemently denied by the Marine Corps and the Department of Defense.

But the bottom line is this:  the Marines left Yemen, but their weapons did not.  Of course these two situations are different; unlike the Navy sailors in the Gulf, no Marine in Yemen was ever under the control of a foreign power.  The two are similar, though, in that in both cases the people involved made tough calls in the interests of grand strategy.  A firefight with Iran inside their territorial waters, or with Yemeni authorities at their international airport, would have been the only way that either of these situations would have had a different outcome.  And in both cases, such an outcome would have resulted in dead Americans, and a blow to US foreign policy goals.

At this point a lot of people will be outraged, thinking that I’m insulting the Marines, or worse, sticking up for the Navy.  I’m not doing either of those things.  I simply firmly believe that both groups–the Navy sailors who were temporarily detained in a police action by Iranian forces, and the Marines who had to destroy their personal and crew-served weapons before they boarded a commercial flight out of an unstable foreign country–salvaged the best outcome they could from a crappy situation.  The alternative in each case was a minimum of an international incident and, in a worst-case scenario, a war.

So, to recap, the Navy had its “don’t give up the ship” moment with Iran last week.  The Marines had their “every Marine a rifleman… except when we give up our rifles” incident in Yemen last year.  And lest any of my Army friends want to start pointing the “ha ha finger” at anyone, we have our Bergdahl.  Every service has its embarrassments, but at the end of the day we should be grateful that the situations weren’t worse.  I’m perplexed about the recent incident with the Navy, and annoyed that the Marines were not allowed to leave Yemen with their weapons, but we should all be proud of our military, the most powerful that ever was.  This incident, too, shall pass.